President Volodymyr Zelenskyy has urged the West to give Ukraine tanks, planes and missiles to fend off Russian forces as his government said Moscow’s forces were targeting the country’s fuel and food depots. 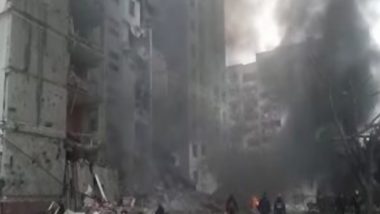 President Volodymyr Zelenskyy has urged the West to give Ukraine tanks, planes and missiles to fend off Russian forces as his government said Moscow’s forces were targeting the country’s fuel and food depots. Ukrainian Interior Ministry adviser Vadym Denysenko said on Sunday that Russia had started destroying Ukrainian fuel and food storage centres, meaning the government would have to disperse stocks of both in the near future.  Russia-Ukraine War: 12 Journalists Killed in Ukraine Since Beginning of War, Says Ukrainian Prosecutor General Iryna Venediktova

Ukraine said on Sunday that Russia holding a referendum in occupied Ukrainian territory would have no legal basis and would face a strong response from the international community, deepening its global isolation.  Russia-Ukraine War: US Bans Russian Cyber Company Kaspersky Citing Risk to National Security, Firm Calls Move Political

The Russian-controlled Luhansk region in eastern Ukraine could hold a referendum soon on joining Russia, its local leader was quoted as saying. "All fake referendums in the temporarily occupied territories are null and void and will have no legal validity," Ukraine's foreign ministry spokesperson Oleg Nikolenko said in a statement to Reuters. "Instead, Russia will facе an even stronger response from the international community, further deepening its global isolation."

A separatist leader in eastern Ukraine says that his region wants to hold a vote on joining Russia.

Leonid Pasechnik, the head of the self-proclaimed Luhansk People’s Republic, said Sunday that it could hold a referendum “in the nearest time” asking voters whether they support making the region part of Russia.

(The above story first appeared on LatestLY on Mar 27, 2022 07:08 PM IST. For more news and updates on politics, world, sports, entertainment and lifestyle, log on to our website latestly.com).