Ukraine President Volodymyr Zelenskyy said that nearly 1,25,000 people have been evacuated to safe territory. Head of Kyiv region police on Sunday said that one US journalist was killed, another wounded by Russian forces in Irpin town. 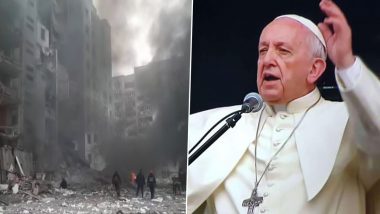 Kyiv, March 13: Mariupol in eastern Ukraine has been cut off from the rest of the world for almost two weeks and no one is allowed in or out amid intense fighting, with vehicles full of aid waiting in the outskirts of the city, reported a state media house. The Russian invasion has raged in the last couple of days. The Ukrainian government on Saturday said that the Russian troops have increased their force in the outskirts of Kyiv.

Governor of Ukraine’s Lviv region has said that 35 people were killed and 134 injured in a Russian attack on Ukraine’s western military base, news agency Reuters reported. The strike followed Russian threats to target foreign weapon shipments that are helping Ukrainian fighters defend their country against Russia's invasion. Russia-Ukraine War: 35 Killed After Russian Airstrike Hits Base in Western Ukraine Near Poland Border.

Pope Francis has condemned the war in Ukraine, saying the “unacceptable armed aggression” must stop. “In the name of God I ask you: stop this massacre!” he added.

BREAKING: Pope Francis condemns 'barbaric killing of children' and says that the 'massacre' in Ukraine must stop

Russian forces are attempting to surround Ukrainian forces in the east of the country as they advance from the direction of Kharkiv in the north and Mariupol in the south, according to Britain’s defence ministry. Russia-Ukraine War Latest Updates: Mosque in Mariupol, Hospitals in Mykolaiv Shelled; German Chancellor Olaf Scholz, France President Emmanuel Macron Hold Joint Phone Call With Vladimir Putin.

Ukraine President Volodymyr Zelenskyy said that nearly 1,25,000 people have been evacuated to safe territory. Head of Kyiv region police on Sunday said that one US journalist was killed, another wounded by Russian forces in Irpin town.

(The above story first appeared on LatestLY on Mar 13, 2022 07:04 PM IST. For more news and updates on politics, world, sports, entertainment and lifestyle, log on to our website latestly.com).