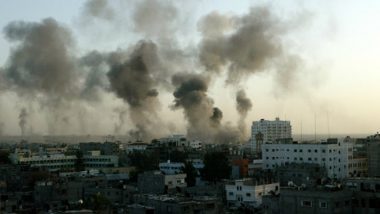 At least five women were among the dead in the town of Ariha in Idlib province, where Russian-backed government forces are conducting an offensive against the country's last major rebel bastion, the Syrian Observatory for Human Rights said. Russian Air Strikes Kill 9 Civilians in Syria's Northwest: Monitor.

A dust-covered doctor ran out of the Al-Shami clinic screaming following the attack, which partially damaged the facility's walls, an AFP correspondent reported.

Nearby, three entire buildings had collapsed.

The wailing of women and children rang out as rescue workers searched for corpses beneath the rubble, the correspondent added.

The latest deaths brings the total number of civilians killed by Russian air strikes in Idlib over the past 24 hours to 21, the Observatory said.

Earlier this month, Russia denied launching any combat operations in the Idlib region since a ceasefire it agreed with rebel supporter Turkey went into effect on January 12.

But the truce has since become a dead letter and the number of reported Russian raids has risen sharply.

Thousands of Russian troops are deployed across Syria in support of the army, while a contingent of Russian private security personnel also operates on the ground.

Moscow's military intervention in 2015, four years into the Syrian conflict, helped keep President Bashar al-Assad in power and started a long, bloody reconquest of territory lost to rebels in the early stages of the war.

The fierce bombardment coincides with a ground push by government forces in the south of Idlib province, where they captured the strategic highway town of Maaret al-Numan on Wednesday.

They are now pushing on towards the town of Saraqib, whose residents have mostly fled in recent days in the face of heavy bombardment.

Both towns lie on the key M5 highway connecting the capital Damascus to second city Aleppo.

The road has been in the sights of the government for some time as it seeks to revive a moribund economy ravaged by almost nine years of war.

(The above story first appeared on LatestLY on Jan 30, 2020 03:28 PM IST. For more news and updates on politics, world, sports, entertainment and lifestyle, log on to our website latestly.com).