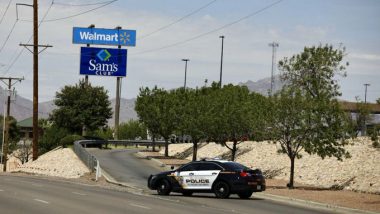 Washington, August: Police in Texas reported an active shooter situation Saturday in a commercial district of El Paso. The police put out a tweet urging people to stay away from a shopping center called Cielo Vista Mall.

The local ABC affiliate, KVIA, said the active shooter situation was unfolding in a Walmart store. CNN said three restaurants in the area were on lockdown.

(The above story first appeared on LatestLY on Aug 04, 2019 12:11 AM IST. For more news and updates on politics, world, sports, entertainment and lifestyle, log on to our website latestly.com).