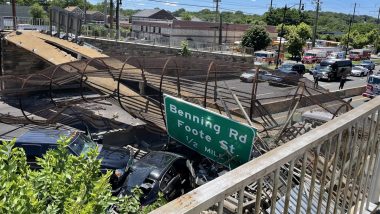 "Update bridge collapse I-295 prior to Polk St NE. Sixpatients assessed, four of those were transported," Xinhua news agency quoted the Department as saying in a tweet on Wednesday.  Bridge Collapse in Delhi: One Dead After Under-Construction Bridge Collapses in Punjabi Bagh Area

"At least 1 other vehicle was struck by debris. Collapse blocks both directions," the Department added.

An initial report said the truck hit the bridge around 12 p.m. on Wednesday.

Washington Metropolitan Police Department is in the early stages of investigating the cause of the collapse, said spokesperson Alaina Gertz.

(The above story first appeared on LatestLY on Jun 24, 2021 01:58 PM IST. For more news and updates on politics, world, sports, entertainment and lifestyle, log on to our website latestly.com).