An estimated total of 16,000 mosques have been razed in the last decade, with nearly 8,500 among them being demolished in the last three years. The destruction of mosque coincides with the allegations of cultural and ethnic cleansing in Xinjiang - the sole Muslim majority province of China. 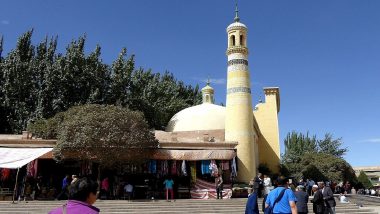 Canberra, September 25: Thousands of mosques were destroyed by China in the country's northwestern Xinjiang province, a report by a leading Australian think tank has claimed. Most of the religious structures that have been destroyed were razed down or partially dismantled in the last three years, the study claimed. US House of Representatives Approves Bill to Ban Imports from China's Xinjiang Uighur Region Due to Suspected Forced Labour.

The startling claim, which comes amid allegations of "Uyghur genocide" being levelled against the Communist regime in China, was included in Australian Strategic Policy Institute (ASPI) report. Satellite images, testimonies of Xinjiang defectors and foreign visitors of the province were used to compile the report.

Apart from mosques, other Islamic shrines and pilgrimage centres in Xinjiang, including the holy site of Ordam Mazar was reduced to rubble, revealed the satellite imagery accessed by the report compilers.

An estimated total of 16,000 mosques have been razed in the last decade, with nearly 8,500 among them being demolished in the past three years. The destruction of mosque coincides with the allegations of cultural and ethnic cleansing in Xinjiang - the sole Muslim majority province of China.

The ASPI report also stated that most of the mosques that were razed are based outside capital Urumqi and Kashgar, the ancient trading town which is frequented by tourists visiting the region.

Some of the ancient mosques which remain in the area include Urumqi's Grand Mosque, but reports had claimed that it was partially destroyed and its area was reduced. The religious site reportedly remains heavily guarded and the entry of devotees is strictly regulated.

The think tank, in its study, also noted that majority among the mosques which were not razed have their domes and minarets removed. In all, the number of mosques in Xinjiang has come down to 15,500 - which is the lowest since China's Cultural Revolution of the 1960s'.

Interestingly, the ASPI report also mentioned that most of the Buddhist temples and churches in the same region were not destroyed.

The action against mosques, which has been put forth in international media reports over the past couple of years, also comes amid the increasing number of detention centres in Xinjiang. While Beijing has called them "re-education camps", governments in the West led by the United States have compared them to Nazi-style concentration camps where thousands of Uyghur Muslims have been killed and others subjected to forced labour.

China, however, has denied allegations of killing Uyghurs or forcing them into involuntary labour. The Foreign Ministry, while responding to the ASPI report on mosques' demolition on Friday, said the report is based on "anti-China lies". The think tank lacks "academic credibility", Ministry spokesperson Wang Wenbin said, adding that there were about 24,000 mosques in the region.

(The above story first appeared on LatestLY on Sep 25, 2020 05:10 PM IST. For more news and updates on politics, world, sports, entertainment and lifestyle, log on to our website latestly.com).