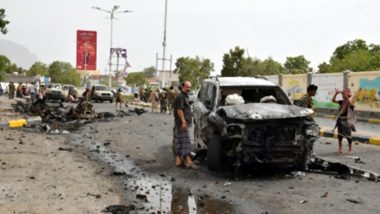 The troops raided the al-Qaida terrorist group's strongholds in various areas of the province in recent days, killing 24 armed al-Qaida members, the local security source said on condition of anonymity on Saturday.

"The troops launched on Saturday the fourth phase of the anti-terror campaign aimed at pushing their elements out of the whole province," the source added. Ukrainian Armed Forces Claim It Shot Down Four Russian Aircraft Including Two Su-30 Jets.

He said al-Qaida militants were evicted in four districts following weeks of deadly fighting, adding that 32 soldiers were killed and 40 others wounded in operations in the past several days, Xinhua news agency reported.

The pro-government forces backed by Saudi Arabia also continued their operations against al-Qaida militants in other southern areas, according to the official.

On Tuesday, military units of the Southern Transitional Council (STC), which are part of Yemen's government, attacked al-Qaida hideouts and positions in various mountainous areas of turbulent Abyan, making headway on the ground. Rafael Nadal Pulls Out of Laver Cup 2022 After Doubles Match Alongside Roger Federer.

In August, the STC troops launched a major anti-terror operation code-named "Arrows of the East" in Abyan to combat terrorist groups.

The Yemen-based al-Qaida in the Arabian Peninsula (AQAP) network has been responsible for many high-profile attacks against the security forces in the country's southern provinces.

The AQAP has exploited years of deadly conflict between the Yemeni government and Houthi militia to expand its presence in the war-ravaged Arab country.

(The above story first appeared on LatestLY on Sep 25, 2022 09:28 AM IST. For more news and updates on politics, world, sports, entertainment and lifestyle, log on to our website latestly.com).