Aditi Rao Hydari believes a life-affirming film like Sardar Ka Grandson is important in today's time as it's about family and the bond shared with them. The 34-year-old actor said the film reminded her of the bond she shared with her grandmother. 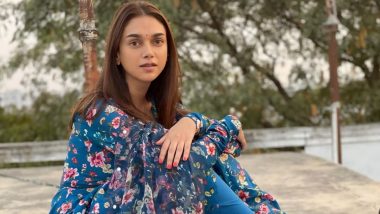 Actor Aditi Rao Hydari believes a life-affirming film like Sardar Ka Grandson is important in today's time as it's about family and the bond shared with them. Directed by debutante Kaashvie Nair and scripted by Anuja Chauhan, the film narrates the story of a devoted grandson (Arjun Kapoor) who embarks on a complicated and comic journey to fulfil his ailing grandmother (Neena Gupta) last wish. In the film, Hydari plays the younger version of Gupta. The 34-year-old actor said the film reminded her of the bond she shared with her grandmother. Sardar Ka Grandson: Rakul Preet Singh Drives a Truck in Her Upcoming Film, Calls It ‘Once in a Lifetime Experience’.

"I was very close to my grandmother and she passed away a few years ago and it broke my heart. A film like this is special because it is about a grandmother, her dream, her love. It is also about family, how there are stubborn and determined people in the family, making it all happen. These warm, fuzzy films are so life- affirming in every way and are so important,” Hydari told PTI. Sardar Ka Grandson Trailer: Arjun Kapoor, Rakul Preet and Neena Gupta Star in Netflix’s Heartwarming Flick, Don't Miss John Abraham's Cameo! (Watch Video).

The actor praised Nair for capturing the film with all heart and warmth. Also featuring John Abraham, Rakul Preet Singh, Soni Razdan, Kanwaljit Singh, among others, is produced by T-Series, Emmay Entertainment and JA Entertainment. It will be released on Netflix on May 18.

Hydari, meanwhile, is elated with the response to her performance in Neeraj Ghaywan-directed segment of Ajeeb Daastaans, titled Geeli Pucchi, also starring Konkona Sen Sharma. In the film, which addresses issues like caste system, patriarchy, sexuality and privilege, Hydari plays the character of Priya, an upper caste, newly married woman.

Hydari said she is happy to have worked with Ghaywan and Sharma. “I loved the film and I loved working on it. The response has been overwhelming beyond belief. The fact is everybody is responding to all the nuances. It is wonderful to work with such an honest director. I am so excited and happy,” Hydari said.