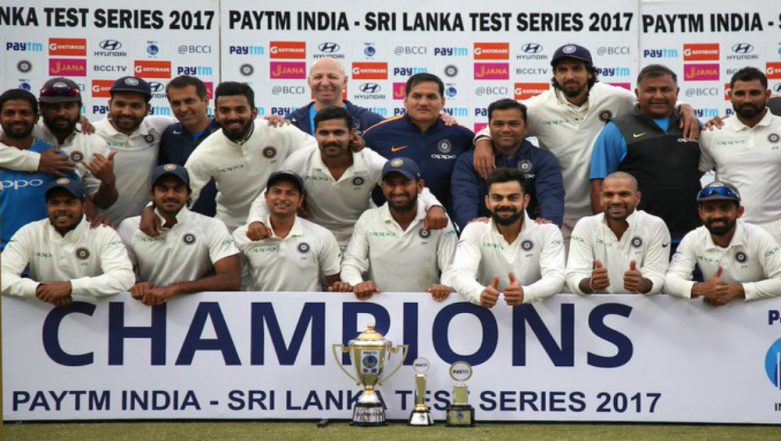 New Delhi, August 21: One 97 Communications Pvt. Ltd, owners of Paytm, on Wednesday retained the sponsorship rights for BCCI's International and domestic matches with a winning bid of Rs 3.80 crore per match.

The Board of Control for Cricket in India (BCCI) on Wednesday announced the deal with the Paytm, which had acquired the rights in 2015 for a four-year period.

"The winning bid was at a price of INR 326.80 crores to be paid for 2019-23 home season. The winning bid was INR 3.80 crores which is at 58% incremental value in comparison to the previous per match value of INR 2.4 crores," BCCI said in a statement. After Years of Defiance, BCCI Finally Agrees to NADA Tests.

"I'm pleased to announce Paytm as the BCCI home series title sponsor. Paytm is one of the new generation companies of India and we at the BCCI are proud of Paytm continuing its long-standing commitment with Indian Cricket," BCCI CEO Rahul Johri said in a statement.

Vijay Shekhar Sharma, Founder & CEO, Paytm said, "We are excited to continue our long-term association with BCCI and the Indian Cricket Team. Our commitment to Indian Cricket gets stronger with every season. India loves cricket and we at Paytm are the biggest fans of it."

Comments
Tags:
BCCI BCCI CEO Board of Control for Cricket in India Paytm Paytm Sponsorship Rahul Johri
Comments
You might also like