Reliance Jio on Tuesday announced the largest launch of its True 5G services across 50 cities in the country. With this, Jio users across 184 cities are now enjoying the fifth-generation mobile services. 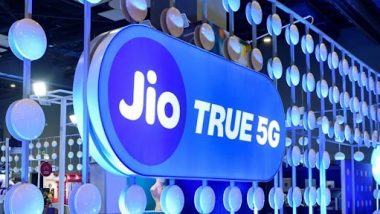 Mumbai, January 24: Reliance Jio on Tuesday announced the largest launch of its True 5G services across 50 cities in the country. With this, Jio users across 184 cities are now enjoying the fifth-generation mobile services.

Jio users in these cities will be invited to the Jio Welcome Offer to experience unlimited data at up to 1 Gbps speeds at no additional cost, starting on Tuesday, the statement said. 5G in Rajasthan: Jaipur, Jodhpur and Udaipur Get Reliance Jio 5G Services From Today.

Jio spokesperson said, "We are thrilled to launch Jio True 5G services in 50 additional cities across 17 states and Union Territories, taking the total count to 184 cities. This is by far one of the largest rollouts of 5G services, not just in India, but anywhere in the world."

"We have stepped up the speed and intensity of True 5G roll-out across the nation because we want every Jio user to enjoy the transformational benefits of Jio True 5G technology in the new year 2023. The entire nation will be able to enjoy and benefit from Jio True 5G services by December 2023," the spokesperson said.

The cities in Puducherry; Amritsar, Bikaner, Kota in Rajasthan; Dharmapuri, Erode and Thoothukudi in Tamil Nadu; Nalgonda in Telangana, and Jhansi, Aligarh, Moradabad, Saharanpur in Uttar Pradesh, and Asansol and Durgapur in West Bengal now have access to Jio 5G services. According to the statement, Lok Sabha Speaker Om Birla will inaugurate Jio True 5G in Kota.