Brahmastra Trailer: Alia Bhatt Expresses Gratitude for All the Love

The release of the Brahamastra trailer has received a lot of love for its acting and great vfx. Many actors and others, including Ayan Mukerji and Karan Johar have thanked everyone on social media for their support. Alia Bhatt has now joined them. She took to her Instagram story to thank everyone for all their love towards the movie. 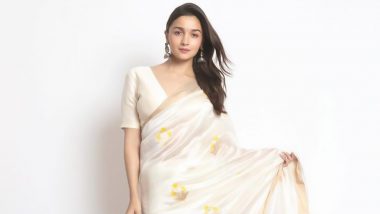 Actor Alia Bhatt, who is currently busy shooting for her Hollywood debut Heart of Stone, took some time off her work schedule to thank the audience for showering love on the Brahmastra trailer. Taking to Instagram Stories, Alia wrote, "Another GREAT day on Heart of Stone - so so so tired - but so so so happy with all the love for our d Brahmastra... makes all the aches and pains go away.. love you alll." Alia Bhatt Jets Off for Her Hollywood Debut, Feels ‘Like a Newcomer All Over Again’.

Alongside the note, she dropped a picture, in which she is seen lying on her bed, while posing for a selfie. Helmed by Ayan Mukerji, Brahmastra also stars Ranbir Kapoor, Amitabh Bachchan, Nagarjuna and Mouni Roy. 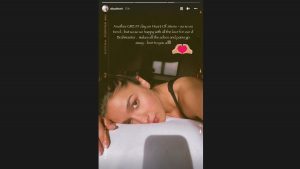 The 2-minute 52-second-long trailer begins with Ranbir running forward and colliding with something that looks like a bus. Amitabh Bachchan is heard introducing Ranbir as a boy who is unaware that he has superpowers. The trailer gives us a glimpse of how a parallel universe exists in the modern age, with many visuals depicting a magical world of romance along with a lot of action sequences. Brahmastra is scheduled to release in theatres on September 9. Shah Rukh Khan In Brahmastra Trailer? Fans Think They Spotted SRK In Ranbir Kapoor And Alia Bhatt’s Film Promo, Share Stills On Twitter.