Alia Bhatt Jets Off for Her Hollywood Debut, Feels ‘Like a Newcomer All Over Again’

Bollywood actress Alia Bhatt, who got married to Ranbir Kapoor last month in an intimate ceremony, has jetted off to an undisclosed location for the shoot of her Hollywood debut project Heart of Stone. 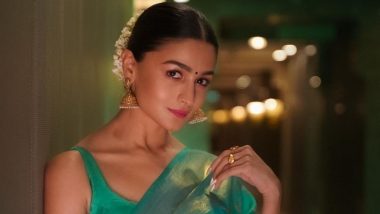 Bollywood actress Alia Bhatt, who got married to Ranbir Kapoor last month in an intimate ceremony, has jetted off to an undisclosed location for the shoot of her Hollywood debut project Heart of Stone. The actress will star alongside some of the distinguished names in Hollywood like Wonder Woman star Gal Gadot and Belfast star Jamie Dornan. Cindy Sirinya Bishop Recreates Alia Bhatt’s Gangubai Kathiawadi Look and It’s Too Beautiful To Be Missed (Watch Video).

Alia took to her Instagram to share a picture of herself from the aircraft. She wrote in the caption, "And off I go to shoot my first ever Hollywood film!!!! Feel like a newcomer all over again - sooooo nervous!!!! Wish me luckkkkkkk (sic)." Alia's close ones took to the comments section to show their support on her new journey. Her mother Soni Razdan commented, "Wishing you all the luck in the whole world." Her sister-in-law Riddhima Kapoor wrote, "We love you," while her '2 States' co-star Arjun Kapoor called her 'International khiladi'. RRR OTT Release Date: Ram Charan, Jr NTR, Ajay Devgn and Alia Bhatt’s Film To Arrive on Netflix and ZEE5 on May 20 Free for Subscribers.

The official logline of the film tells that the film revolves around Rachel Stone (played by Gal Gadot) an intelligence operative, the only woman who stands between her powerful, global, peace-keeping organisation and the loss of its most valuable and dangerous asset. Billed as a spy thriller for Netflix, 'Heart of Stone' will be directed by Tom Harper. The script of the film has been penned by Greg Rucka and Allison Schroeder.

(The above story first appeared on LatestLY on May 20, 2022 08:13 PM IST. For more news and updates on politics, world, sports, entertainment and lifestyle, log on to our website latestly.com).