According to Fox News, the 42-year-old actor had gushed over his wife Katherine Schwarzenegger and their healthy daughter on Instagram. 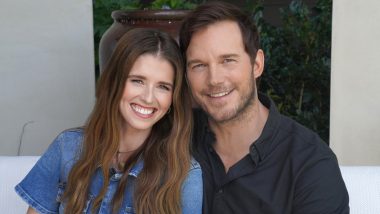 Hollywood actor Chris Pratt was recently slammed for a social media post about his 'healthy' new child after his first child's health issues. According to Fox News, the 42-year-old actor had gushed over his wife Katherine Schwarzenegger and their healthy daughter on Instagram. However, some fans interpreted the message as an indirect insult directed at his previous wife Anna Faris and the son they share, who has had some health issues over the years. Anil Kapoor’s Diwali Bash Attended by Arjun Kapoor, Janhvi Kapoor, Malaika Arora and Others (View Pics).

For his tribute to Schwarzenegger, Pratt shared a photo of himself and his wife wrapping their arms around each other. Schwarzenegger gazed lovingly at her husband while he smiled for the camera. "Guys. For real. Look how she's looking at me! I mean. Find you somebody that looks at you like that!! You know!?" he captioned the photo. "We met in church, adding She's given me an amazing life, a gorgeous healthy daughter, she chews so loudly that sometimes i put in my ear buds to drown it out, but that's love!" Sooryavanshi Movie Review: Akshay Kumar and Katrina Kaif's Actioner Opens to Mixed Response From Critics.

Pratt then joked that while his wife helps him "with everything," he returns the favour "periodically" by opening "a jar of pickles." He added, "That's the trade."

"Her heart is pure and it belongs to me. My greatest treasure right next to my Ken Griffey Jr Upper Deck Rookie card. Which if you know, you know is saying a lot. It's her birthday in about 6 weeks. So if I don't get her anything, I'll tell her to look back on this post. Love you honey," Pratt continued.

While Schwarzenegger and her family found the Instagram post endearing and hilarious, some social media users weren't too pleased with what the 'Guardians of the Galaxy' star had to say. "You do know you have a son, right? Should he also be a greatest treasure?" said a follower in reference to Pratt's 9-year-old son Jack, whom he shares with ex-wife Anna Faris. Jack has gone through some health issues after having been born prematurely, Page Six had reported.

"For me it was the emphasis on 'healthy child' like your firstborn is lesser in your eyes. You need to go read that sentence thru HIS eyes & apologize to him bcuz your wording was cruel Dude..." suggested a commenter. "Wait... you might not get her anything?!" another asked, while a third posted, "If you don't get her anything?!?!" "Met in church, but you left your first wife for her, sooo I wouldn't call you Mr. holy," yet another jabbed.

Pratt married Schwarzenegger in 2019 about a year after they began dating. Their daughter, Lyla Maria, was born in August 2020. The 'Parks and Recreation' alum was married to Faris from 2009-2018. She is now married to cinematographer Michael Barrett, as per Fox News.