No Lohri is complete without the energetic steps of Bhangra and Gidda, and to make the harvest festival more enjoyable, several Punjabi folk songs and Bollywood tracks have been made over the years that you would want to dance on a winter night of January 13. 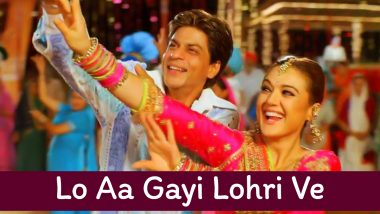 New Delhi, January 12: No Lohri is complete without the energetic steps of Bhangra and Gidda, and to make the harvest festival more enjoyable, several Punjabi folk songs and Bollywood tracks have been made over the years that you would want to dance on the winter night of January 13.

From 'Sundri Mundri Hoye' to 'Chappa Chappa Charkha Chale' and 'Lo Aa Gayi Lohri Ve', one can elevate their Lohri celebrations with a dash of music in the warmth of a bonfire. So, let's have a look at Lohri-themed songs that one must add to their festive playlist. How To Celebrate Lohri 2022 Amid COVID-19? From Limited Gathering to Home-Made Food, Easy Tips To Plan the Festivities.

If you have ever attended true-blue Lohri celebrations, chances are you've definitely heard the cheery song, 'Sundri Mundri Hoye' by people gathered around the bonfire. The spirit of Lohri lies in the particular Punjabi folk song. It has been believed that Lohri is celebrated in honour of 'Dulla Bhatti', who was a local hero of the Punjab region and during the reign of Akbar, he worked as a saviour of the people.

He saved a group of young girls from being sold into slavery. The two rescued girls named Sundri and Mundri gradually became a theme of Punjab's folklore. Several singers including Harbhajan Mann and Meet Kaur among others have lent their voices to the famous Punjabi folk song.

If you are planning to attend any Lohri party, then make sure you are well-versed with the song's lyrics -- especially its hook line 'Sundri Mundri Hoye. Tera kaun vicaharaa ho. Dullah bhatti walla ho'.

Sung by legendary singer Lata Mangeshkar along with Udit Narayan and Gurdas Mann, the vibrant track is set in the village of Punjab. In the song's video, we can see Pakistani Zara (Preity Zinta) dancing with Indian Veer (Shah Rukh Khan).

A group of dancers is also seen performing the traditional Punjabi folk dances - Bhangra and Gidda - around the holy bonfire. Don't forget to give a filmy touch to your Lohri party with this song.

'Charha De Rang' from Sunny Deol and Bobby Deol's film 'Yamla Pagla Deewana' is another Lohri-themed song that will make you shake a leg with your loved one as the major portion of the song revolves around Bobby trying to woo his ladylove. While the lyrics of the song speak little about Lohri, the traditional dance, the set and the actors' costumes make it relevant to the festival.

Thanks to Gulzar for giving us this gem. Any get-together is incomplete without grooving to the beats of 'Chappa Chappa Charka Chale' from the film 'Maachis'.

Set in the backdrop of Punjab militancy, the particular track depicts the softer side of militants, in the snow-capped Himalayas away from farms and fields of homeland, yearning for their beloveds.

Seeing Chandrachur Singh, Jimmy Sheirgill, Ravi Gossain and Suneel Sinha bonding over a bonfire in 'Chappa Chappa Charka Chale' will definitely make you sit with your loved ones and absorb the warmth emitted by the crackling fire this Lohri.

So, grab a bucket full of popcorn, rewari and peanuts, and hit the play button on the above-mentioned songs to have a happy and musical Lohri.