Indian women have definitely been making a mark at the international beauty pageants. The recent one to bring home the glory is Navdeep Kaur. 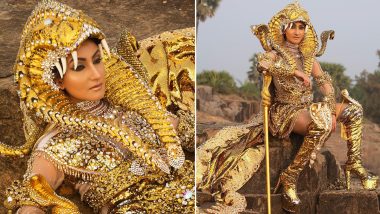 Indian women have definitely been making a mark at the international beauty pageants. The recent one to bring home the glory is Navdeep Kaur. Navdeep, who hails from Odisha, recently won the Costume Round of Mrs World 2022 held in Nevada, Las Vegas. Making the announcement, the official handle of Mrs India wrote on Instagram, "Heart overflowing with gratitude!! India we made it, We are glad and honoured to announce that our queen Mrs. India World 2021 has won the National Costume by @eggiejasmin_artist on Mrs. World 2022." Mrs World 2022 Winner is Mrs American Shaylyn Ford, Mrs India World Navdeep Kaur Finishes in Top-15 at The Beauty Pageant (View Pic).

Dressed up as Kundalini Chakra, Navdeep beautifully depicted India's cultural aspect with her costume on the global platform. The golden attire comprised a huge serpent head and snake-like details throughout, along with a serpent cane. It's been learnt that Kundalini Chakra symbolises the movement of energy in the chakras of the body from the base to the spine up through the crown. Kudos to artist Eggie Jasmin for conceptualising Navdeep's look. Jasmin sprinkled the unique costume with over 50,000 diamond rhinestones.

Brocade, tulle and Korean sequin fabric were used to craft the costume, while pearls and crystals were added as a final touch for a regal look. Mrs World 2022 Final Live Streaming Online & Time in IST: When & Where to Watch Live Telecast of Navdeep Kaur of India Participating at Beauty Pageant For Married Women.

After seeing Navdeep's outfit, everyone's heart swelled with pride. "Beautiful. What a concept," a social media user commented. "Couldn't be more proud. In awe of the outfit," another one wrote. For the unversed, Navdeep worked as an assistant manager at a private bank before entering the world of beauty and fashion. She won the title of Mrs India World in October 2020. She is also a doting mother to a 5-year-old child.