The two rappers walked side by side down the steps of the Coliseum as the choir sang West's 'Ultralight Beam' in a powerful show. West took the stage first to debut Praise God. 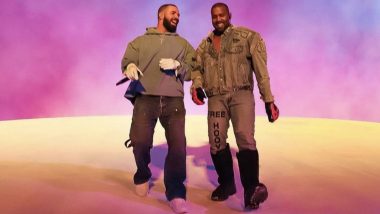 Grammy-winning artists Kanye West and Drake took the stage together for the first time since ending their feud as they hosted the sold-out 'Free Larry Hoover' benefit concert. As per People magazine, the concert took place at the Los Angeles Memorial Coliseum on Thursday night. Hailee Steinfeld Birthday: 7 Times the ‘Hawkeye’ Beauty Looked Bewitching in Black (View Pics).

The two rappers walked side by side down the steps of the Coliseum as the choir sang West's 'Ultralight Beam' in a powerful show. West took the stage first to debut 'Praise God'. He then "took it back to day one," performing classics including 'Gold Digger', 'Touch the Sky', 'Stronger' and 'All of the Lights'. Nabha Natesh Birthday Special: Actress' Fashion Outings Are Always Chic and Spectacular (View Pics).

Several pictures and videos of the two rappers from the event have been doing the rounds on social media. Drake later took the stage to perform some of his biggest hits, including 'No Friends in the Industry', 'Life Is Good', 'IMY2' and 'Laugh Now Cry Later'. "I appreciate Kanye for having me up here tonight," Drake said. "It's important that we make this happen. When we were walking through the arches right there it felt like a dream. It felt surreal. It was something I always wanted to do being on stage with my idol as he's running through one of the best catalogs in music, period," Drake added.

To end the show, West hit the stage with Drake after changing into matching denim jackets and jeans to perform 'Hurricane', his song with The Weeknd, and 'Come to Life'. He also performed 'Bound 2', 'N--s in Paris' and 'Father Stretch My Hands Pt. 1'. The show ended with both artists performing Drake's song 'Forever'. The two embraced for a hug and then walked off stage together. The concert comes about a month after the two rappers -- along with J Prince -- met up and said it was "time to put [the feud] to rest."

"I'm making this video to address the ongoing back-and-forth between myself and Drake," West said at the time in the video. "Both me and Drake have taken shots at each other and it's time to put it to rest," added West. Drake and West agreed to perform on Thursday to benefit Hoover, who has been incarcerated at the ADX federal prison in Colorado, where other criminals, such as El Chapo Guzman, are locked up, reported People magazine.

The show was meant to bring awareness about his incarceration and Hoover's family's efforts to free him after the 2018 Free Step Act gave federal prisoners with drug-related charges the chance to reduce their sentences. Neither Drake nor West made mention of Hoover during the entirety of the show. West raps with Hoover's son Larry Hoover Jr. on his new album Donda on tracks 'Jesus Lord' and 'Jesus Lord Pt. 2'. In the songs, Hoover Jr. promises his father won't be involved in gang activity was he to get out. Hoover is now 71.

Hoover was convicted on 40 counts related to leading the Gangster Disciples and trafficking drugs from 1970 and 1997.

As for the rappers' feud, it dates back several years and resurfaced this year after the releases of West's 'Donda' and Drake's 'Certified Lover Boy'. On the albums, they both share disses about each other. Though the Canadian rapper never calls out West by name, fans were quick to dissect several lines on multiple songs from 'Certified Lover Boy' that appear to take digs at him, most notably on '7AM on Bridle Path'.

The concert also marks Drake's return to the stage after appearing alongside rapper Travis Scott during last month's deadly Astroworld Festival where 10 people were killed. Drake is among those named in several lawsuits related to the tragedy, including one USD 750 million lawsuit. As for West, he's been at the centre of controversy due to welcoming musician Marilyn Manson, who has been accused by more than a dozen women and sued by four for allegations of sexual and physical abuse, on his 'Donda' album and at a recent Sunday Service.