'Wildcard' is her seventh studio album. Released in November 2019, it includes hits 'Settling Down', 'It All Comes Out in the Wash' and 'Bluebird', which the 21-time Grammy nominee was set to perform during this year's broadcast. 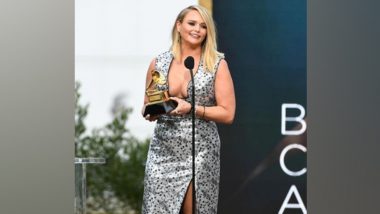 As per People magazine, in her acceptance speech, Lambert highlighted her fellow nominees, saying, "We're such a family in country music."

"I feel like holding this right now, I'm holding it for all of us -- especially us girls," she said, lifting her trophy. "I'm very thankful for this," Lambert added.

She went on to thank her husband, Brendan McLoughlin, her family, and the songwriters and musician "who made Wildcard what it is and this tattoo that inspired it," lifting her forearm to show the design. Grammy Awards 2021: Dan + Shay, Justin Bieber Win Best Country Duo/Group Performance for '10,000 Hours'.

Lambert previously won in the category in 2015 with her fifth album, 'Platinum'. 'Wildcard' is her seventh studio album. Released in November 2019, it includes hits 'Settling Down', 'It All Comes Out in the Wash' and 'Bluebird', which the 21-time Grammy nominee was set to perform during this year's broadcast.

'Bluebird' is also nominated in the best country song and best country performance categories. Lambert earned her first gramophone at the 2011 show, winning the best female country vocal performance for 'The House That Built Me'. Lambert will release her upcoming album with songwriters Jon Randall and Jack Ingram called 'The Marfa Tapes', which is scheduled for May.

This year's female dominance in the best country album category is history-making as, for several years, there have never been all five female nominees (either solo or group) since the category was first created in 1965. At most -- in 2006 -- four of the nominees were female or female-fronted acts.

The 63rd Annual Grammy Awards were delayed owing to the ongoing Covid-19 pandemic. The annual show shifted from its original January 31 broadcast to March 14.

Though usually held at the Staples Center, this year's festivities will take place at the Los Angeles Convention Center. Since the pandemic, a number of awards shows have been postponed and later revamped due to COVID-19 restrictions.