Get latest articles and stories on Entertainment at LatestLY. As the Netflix series 'Hellbound' has gained global popularity, the original webtoon (webcomics) has been also been launched. 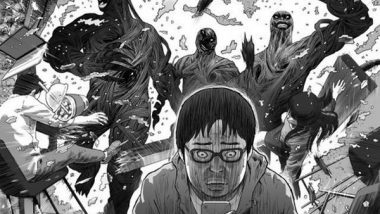 Also Read | Jeffrey Wright Birthday Special: From No Time to Die to Source Code, 5 of the Actor's Best Films According to IMDb!.

This is the result of comparing the average views for two weeks after the release and the weekly average for three months before the release of the Netflix series.

With the huge popularity of the series, the original webtoon 'Hellbound' has also launched the global service.

Currently, the webtoon 'Hellbound' is being serviced in 10 languages, including English, Japanese, Thai, and Spanish, via Naver Webtoon Global Service.

Global fans who first saw 'Hellbound' on Netflix are also giving positive reviews to the webtoon.

The Netflix series 'Hellbound,' released on November 19, was directed and written by Yeon Sang-ho and webtoon creator Choi Kyu-seok, producers of the original webtoon.