Filmmaker Shaunak Sen's documentary All That Breathes has been honoured with the 2022 L'OEil d'Or award. 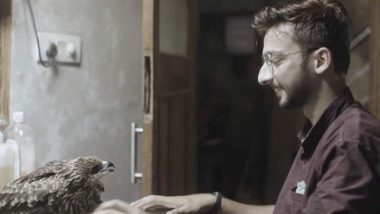 Filmmaker Shaunak Sen's documentary All That Breathes has been honoured with the 2022 L'OEil d'Or award. The L'OEil d'Or documentary award, also known as The Golden Eye award, was created in 2015 by French-speaking authors' society LaScam in collaboration with the Cannes Film Festival. Did Leonardo DiCaprio Praise Urvashi Rautela at Cannes 2022? Twitterati Casts Doubt on Actress’ Claims for This Reason!

"All That Breathes", which recently had its premiere at the Cannes in the Special Screening segment, follows the lives of siblings Mohammad Saud and Nadeem Shehzad who, working out of their derelict basement in Wazirabad, a village in Delhi, rescue and treat injured birds, especially the Black Kites. The 90-minute long film was chosen the winner by the jury, comprising Polish filmmaker Agnieszka Holland, Ukrainian writer-director Iryna Tsilyk, French actor Pierre Deladonchamps, journalist Alex Vicente, and Moroccan writer-filmmaker Hicham Falah. Elvis Actor Austin Butler Gets 12 Minute Standing Ovation at 2022 Cannes Film Festival.

"L'OEil d'Or goes to a film that, in a world of destruction, reminds us that every life matters, and every small action matters. You can grab your camera, you can save a bird, you can hunt for some moments of stealing beauty, it matters.

"It's an inspirational journey in observation of three Don Quijotes who may not save the whole world but do save their world," the jury said in a note shared on the L'OEil d'Or website. The award includes a cash prize of 5,000 euros.

In 2021, filmmaker Payal Kapadia had won the award for her documentary "A Night of Knowing Nothing".

The jury's Special Award was given to Lithuanian filmmaker Mantas Kvedaravicius' final film "Mariupolis 2", an intimate look at the Russia-Ukraine war. Kvedaravicius was allegedly killed by the Russian army while shooting the documentary in April. "Mariupolis 2" also had its premiere at the Cannes Film Festival last week. The 75th edition of the film gala, which kick-started on May 17, concludes on Saturday.