On the occasion of her mother's birthday, Shilpa again took to Instagram to share a lovely message for her. She posted an adorable video. 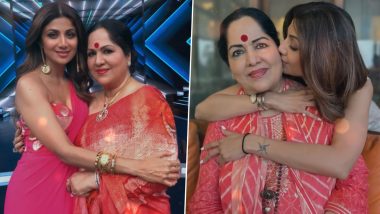 Shilpa Shetty Kundra is known for being polite, fun and humble among the paparazzi and fans. Her outspoken, bubbly nature is loved by many. She is also one of the few actresses who share a lot of her personal life on Instagram via pictures, videos and stories. On the occasion of her mother's birthday, Shilpa again took to Instagram to share a lovely message for her. She posted an adorable video and wrote, "My WORLD, my rock, my bestie, my cheerleader, my force, my sun, moon and ever-shining STAR...Happy birthday to you! Wishing you great health and miles of smiles always." Nikamma Box Office: Shilpa Shetty and Abhimanyu Dasani’s Film Rakes In Rs 51 Lakh on Day 1.

On the work front, Shilpa was last seen in 'Nikamma', which hit the screens on Friday. The film that couldn't create a big impact in theatres marked Shilpa's comeback to the silver screen. It collected only Rs 51 lakh on the first day of its release. Helmed by Sabbir Khan, 'Nikamma' is an action comedy and features Abhimanyu Dassani and Shirley Setia in lead roles. Shilpa Shetty Kundra Is a Diva in an Orange Cutout Dress for Nikamma Promotions (View Pic).

Shilpa will also be seen in Rohit Shetty's cop web series Indian Police Force. The actress will be seen alongside Vivek Oberoi and Siddharth Malhotra. Shilpa also wrapped the shooting of another upcoming film 'Sukhee' around two weeks ago.