Shilpa Shetty and Abhimanyu Dassani's film Nikamma has started off to an average of Rs 51 Lakh according to film trade analyst, Taran Adarsh. The action-comedy was also leaked online, for free downloading and watching online. 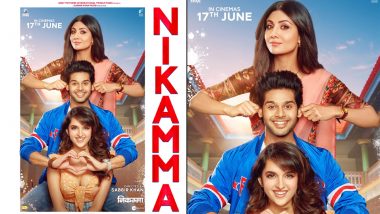 Shilpa Shetty and Abhimanyu Dassani-starrer Nikamma, which was released on Friday, has witnessed an average start. As per film trade analyst Taran Adarsh, the film collected Rs 51 lakh on day one at the box office. "#Nikamma is below par on Day 1, but the biz got a push, post evening, at mass centres, while metros remained weak... Day 2 and 3 are crucial, needs to salvage the situation... Fri Rs 51 lacs. #India biz," he tweeted. Nikamma Full Movie in HD Leaked on Torrent Sites & Telegram Channels for Free Download and Watch Online; Abhimanyu Dassani, Shilpa Shetty Kundra, Shirley Setia’s Film Is the Latest Victim of Piracy?

Helmed by Sabbir Khan, Nikamma is an action-comedy. The film stars Shilpa as superhero, Agni. It follows Agni as she turns Abhimanyu's nikamma (lazy) character Siddharth into a responsible man.

Singer Shirley Setia is also a part of the movie. As Nikamma marks Shilpa's return to films after 14 years, she received a shout-out from her sister, Shamita Shetty. "All d best for Nikamma munki !!! congratulations to the entire team and Ofcourse to you my munki on ur return to Big screen after so many years am soo exciteddddddd for you guys Nikamma is finally out in cinemas near you .. please go watch it," Shamita posted on Instagram. Nikamma: Abhimanyu Dassani Discusses His New Film and Shares a Message for Those Who Don't Have Their Lives Figured Out.

Shilpa will be next seen in Sukhee, which is being helmed by Sonal Joshi, who has earlier served as an assistant director on films like Dhoom 3 and Jab Harry Met Sejal among others.