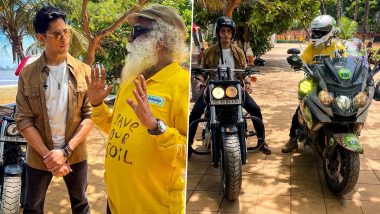 Sidharth Malhotra shared an interesting post with spiritual guru Sadhguru Jaggi Vasudev, on Monday, on his social media account. Taking to his Instagram handle, Sidharth shared a series of pictures of a bike ride with Sadhguru for Save soil Movement. In the picture, Sid could be seen having an interesting conversation with the Sadhuguru. World Environment Day: Sidharth Malhotra Shares Post on Social Media To Raise Awareness.

He could be seen wearing a white round-neck T-shirt that he paired up with a khaki shirt and denim. He also opted for a pair of yellow shade sunglasses. On the other hand, Sadhguru was seen dressed in a yellow t-shirt with 'Save Our Soil' written on his t-shirt and denim. He also wore black sunglasses for the bike ride. Sidharth Malhotra, Karan Johar Spotted at the Launch of Book ‘Modi@20: Dreams Meet Delivery’ (View Pics).

He also posted a cute selfie with Sadhguru. In another picture, Sid and Sadhguru could be seen sitting on the bike all geared up for the ride and posing for the camera. He captioned the pictures, "Destination #HealthyFuture. #SaveSoil ride with @sadhguru" Spiritual guru Sadhguru whose fondness for motorcycles is well-known recently completed 100 days of solo biking, traversing 27 nations as part of his 'Save Soil' campaign.

In an exclusive interview with ANI, the automobile enthusiast revealed the real reason behind choosing to bike it across 27 countries. As part of his movement, the spiritual leader is engaging with heads of states, government officials and experts in 27 countries to underline the urgent need for concerted action to save soil. Sadhguru said India destroyed soil health in last 45 years. "As a third world country, as an Asian nation, India has over 12,000 years of agricultural history.

For 12,000 years, we managed our soils well, which means we must know what we are doing. It is only in the last 45 years that we have destroyed this. I am talking about tree-based agriculture which eventually will lead to organic agriculture" in an ANI interview. Sadhguru had in his previous 'Rally for Rivers' campaign also used motorcycles. Meanwhile, Sadhguru plans to conclude his ongoing campaign at Coimbatore where he is scheduled to reach on June 21, on International Yoga Day.