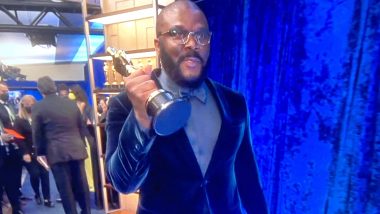 Madea fans rejoice! Actor, director and producer Tyler Perry is bringing his iconic femme senior character to Netflix with a 12th movie titled A Madea Homecoming. As per The Hollywood Reporter, Perry is planning a 12th installment of the film franchise, 'A Madea Homecoming', for a 2022 debut on the streamer. The movie will be shot at Tyler Perry Studios in Atlanta, where the multi-hyphenate films most of his projects. Sex/Life Trailer: Sarah Shahi And Mike Vogel’s Raunchy Netflix Series Promises To Answer ‘What If’ When Married (Watch Video).

Perry will write and direct the upcoming installment, and his shingle's president of production and development, Michelle Sneed, will executive produce the movie along with Perry. Will Areu and Mark Swinton will produce. 'A Madea Homecoming' also expands Netflix's relationship with Perry, whose 2020 film 'A Fall From Grace' was seen by 39 million households in its first month on the streaming service. Knives Out 2: Outer Banks Star Madelyn Cline Boards Daniel Craig’s Multi-Starrer Netflix Film.

Perry's films, including 11 movies and another 20 plays in the Madea franchise, have grossed over USD 1 billion at the North American box office. The character of Madea was first introduced on stage in the 1999 play 'I Can Do Bad All by Myself'. Since then, she's been at the centre of other theatre productions and dozens of films, TV shows, and even a book.

In 2019, Perry talked about retiring the Madea character as he premiered 'A Madea Family Funeral'. "I don't want to be her age playing her, so it was time to shut it down and move on. I've got some other things I want to do, and in this next 50, I'm going to do something different," he told The Hollywood Reporter.

As per Variety, Perry has been quietly developing the project since last fall.

"I was done with Madea, completely done with it," Perry told Variety when he was honoured as 2020's Showman of the Year.

He added, "But as I've been looking at the state of the world -- and I finished a tour in January, just before the pandemic started to break in the country -- and the amount of joy and laughter that it brought to so many people, that's what I think is missing. We need that laughter and that joy." Apart from the upcoming installment, Perry is also shooting 'A Jazzman's Blues' for Netflix, which stars Joshua Boone, Solea Pfeiffer, Amirah Vann and Austin Scott.