Recently, the special's director Ben Winston weighed in on the subject. 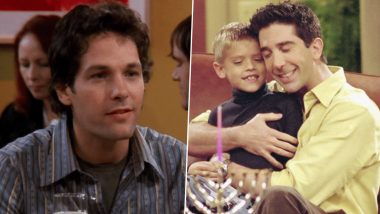 After watching the 'Friends' reunion, many fans wondered why actors Paul Rudd, Cole Sprouse, and more former guest stars were absent from the HBO Max event. Recently, the special's director Ben Winston weighed in on the subject. According to E! News, the highly anticipated HBO Max event featured cast members Jennifer Aniston, Courteney Cox, Lisa Kudrow, David Schwimmer, Matt LeBlanc and Mathew Perry along with a number of cameos from notable 'Friends' guest stars. Friends Reunion: Revelations Made by the Sextet That Gave Fans Further Insight Into the Global Phenomenon.

However, there were two major standouts who were MIA from the reunion, Paul Rudd and Cole Sprouse. As for why Rudd, who played Phoebe's husband Mike, and Sprouse, who portrayed Ross' son Ben, weren't involved in the reunion, it sounds as though there were just too many stars to fit in with so little time. Winston, who directed the reunion special, shared with a news outlet, "Well, we couldn't have everybody on, because it's only an hour and 45 minutes. Friends Reunion HBO Max Special in China Cuts Cameos of BTS, Justin Bieber and Lady Gaga.

And you've got to pay attention--the main nub of the show has got to be about the six cast members. So you can't have too many cameos because of course, there were hundreds of amazing people who were in Friends over the years. Sadly, we couldn't get everybody in." Winston also noted that, given the ongoing global pandemic, it's difficult for people to travel. He told the outlet, "You know, we did invite some people who weren't able to make it. It's a complicated time to be making television now because, you know, some people couldn't fly internationally, some people were on other TV or film shoots, some people are in bubbles on stuff."

"I think during a pandemic, it's really hard to get everybody where you want to be. And the other thing, of course, is we have no flexibility. It was one night that those six [main cast members] were available. The timing of it was incredibly difficult. So, you know, if you weren't available on the seventh of April at 8 pm., then, sadly, they weren't able to be part of it," he added. Unfortunately for fans, both Rudd and Sprouse have extremely busy schedules. As per E! News Rudd has been filming 'Ant-Man and the Wasp: Quantumania' overseas while Sprouse shoots for 'Riverdale' in Vancouver. However, despite the lack of Rudd and Sprouse, the reunion is jam-packed with must-see moments. 'Friends' originally aired for 10 seasons on NBC from 1994 to 2004. The beloved sitcom followed the story of six friends in their 20s and 30s who live in Manhattan, New York City. (ANI)