Get latest articles and stories on India at LatestLY. Four people were killed and dozens injured after a bus collided with a tractor-trolley near Jatu Lohari village in Bhiwani district of Haryana on Thursday. 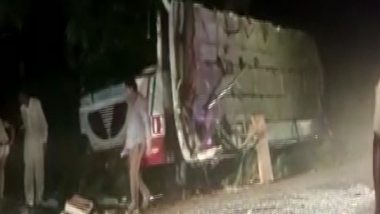 Visual of the accident (Photo/ANI)

Bhiwani, August 27: Four people were killed and dozens injured after a bus collided with a tractor-trolley near Jatu Lohari village in Bhiwani district of Haryana on Thursday.

According to the information shared by the police, the accident happened when the overspeeding bus, headed to Jhansi from Bhiwani, tried to overtake the trolley.

"As per the preliminary inquiry, the bus was being driven at a high speed and the driver lost control of it while trying to overtake the trolley. It was a cooperative society bus with around 60 passengers," said Bhiwani Deputy Commissioner Jaibir Singh Arya.

"Four people died in the accident while the injured were immediately brought to the hospital. Some of them are severely injured and we have referred them to PGIMS hospital in Rohtak for advanced medical facilities," he added.

Arya further stated that the families of the deceased will be compensated as per the government guidelines.

Bhiwani Superintendent of Police (SP) Ajit Singh Shekhawat said that the authorities are ensuring the proper treatment of those injured.

"Right now, our first priority is to provide proper medical care to the injured. We will soon conduct an investigation and the accused will be punished according to the law," added Shekhawat.