Get latest articles and stories on India at LatestLY. As many as six tonnes of waste were removed from the Bhimili beach in Andhra Pradesh's Visakhapatnam, District Collector Dr A Mallikarjun informed on Sunday. 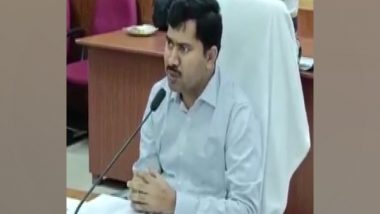 Visakhapatnam (Andhra Pradesh) [India], July 3 (ANI): As many as six tonnes of waste were removed from the Bhimili beach in Andhra Pradesh's Visakhapatnam, District Collector Dr A Mallikarjun informed on Sunday.

Disclosing the administration's goal to completely eliminate single-use plastic products, the district collector said, "Under the auspices of the district government administration, every first Sunday of every month, the program of cleaning the coastal areas of the city is being successfully conducted."

"Around 6 tonnes of waste has been removed today and arrangements will be made to move the garbage to the waste dispose centres," he added.

According to Mallikarjun, the District Collector administration concreted the beach environment clean at Bhimili beach in Visakhapatnam.

The drive was conducted on Sunday on the instructions of the district collector, government employees, volunteers, students, local people, and NGOs.

According to the information, every day thousands of tourists visit various beach areas of Visakhapatnam, who should be made aware not to use single-use plastic.

The movement came two days after the ban on select single-use plastics by the Centre came into effect on July 1 to reduce plastic wastage in the country.

In line with the clarion call given by Prime Minister Narendra Modi to phase out single-use plastic items by 2022, the environment ministry notified the Plastic Waste Management Amendment Rules, 2021 on 12 August 2021.

On the demand side, directions were issued to e-commerce companies, the leading user of single-use plastics, as well as plastic raw material manufacturers to phase out such items.

Several industry stakeholders had earlier argued that India has a low capacity for producing alternative solutions to the banned items.

To ramp up the production, capacity-building workshops are being organized for the industrial units to provide them with technical assistance for manufacturing alternatives to banned single-use plastic items with the involvement of various government agencies. Provisions have also been made to support several enterprises in transitioning away from the banned single-use plastics.