Get latest articles and stories on India at LatestLY. Lok Sabha Speaker Om Birla on Wednesday unfurled the national flag on the occasion of the 73rd Republic Day of India. 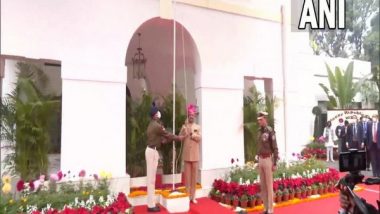 Like every year in the national capital, this year too, a glimpse of the country's strength and culture will be seen on the Rajpath.

Also Read | ‘Thak Thak’ Gang Back In Gurugram After 3.5 Years; Several Instances Of Valuables be Stolen From Cars Reported In The City.

At about 10.05 am, Prime Minister Narendra Modi will pay tribute to the soldiers who made the supreme sacrifice for the country by reaching the National War Memorial. During that time the Defense Minister, Rajnath Singh, Minister of State for Defense Ajay Bhatt, Defense Secretary, Ajay Kumar and the Chiefs of the three wings of the Army, ie, Army, Air Force and Navy, will be present with the PM.

The parade at Rajpath will start at 10:30 am, instead of the earlier timing of 10 am to provide better visibility to the parade and flypast.

The celebrations this year are special as Republic Day falls in the 75th year of Independence, being celebrated as 'Azadi ka Amrit Mahotsav' across the country.

To mark the occasion, the Ministry of Defence has conceptualised a series of new events during the main parade on Rajpath on January 26 and the 'Beating the Retreat' ceremony at Vijay Chowk on January 29.