'Thak Thak' Gang Back In Gurugram After 3.5 Years; Several Instances Of Valuables be Stolen From Cars Reported In The City

“Thak Thak” gang struck again in Gurugram after three and a half years. Several instances of theft have been reported in the city in the past two months. Bags and valuables were stolen from the parked cars in different parts of Gurugram. 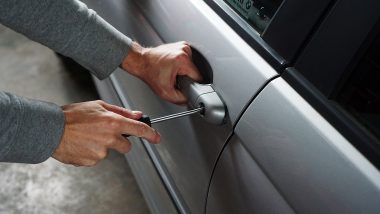 Gurugram, January 26: The notorious “Thak Thak” gang struck again in Gurugram after three and a half years. Several instances of theft have been reported in the city in the past two months. Bags and valuables were stolen from the parked cars in different parts of Gurugram. Their windows were also reported to be broken by the gang members. Notably, the “Thak Thak” gang was active in the city in mid-2018. However, the police then arrested several members of the gang. ‘Thak Thak Gang’ in Delhi Robs Bag From Additional Sessions Judge’s Car in Okhla Area.

The gang members used various tricks to steal valuables from the parked cars. If someone is sitting inside the car, they divert his/her attention to executing their plan. According to a report published in The Times of India, on Monday, a man went to a pharmacy store to purchase some medicines after parking his car outside a mall in Sector 83. However, when the man returned minutes later, he found the window of his car broken and his bag on the back seat was missing.

The victim has been identified as Nitin. There was a laptop and some documents in the bag. A complaint was lodged by Nitin at Kherki Daula police station. On the basis of the complaint, an FIR was registered under section 379 of the Indian Penal Code (IPC). Delhi: Theft by Thak Thak Gang Caught on Camera in South Extension; How Rs 4 Lakh Robbed Using Rs 10-Rupee Notes, Watch Video.

Earlier this month also, two air pistols were stolen allegedly by “Thak Thak” gang members in Gurgram from two national-level shooters. These pistols were worth more than 3.2 lakh. The incident took place around 12.15 pm on January 12. The victims – 20-year-old Rathee and 18-year-old Sagar went to Sadar Bazar market to purchase a phone cover when their guns were stolen.

(The above story first appeared on LatestLY on Jan 26, 2022 10:09 AM IST. For more news and updates on politics, world, sports, entertainment and lifestyle, log on to our website latestly.com).