The woman, Sasmite Gochhait, and her husband Akil Munda were in for a scare when they saw their 2-year-old child crawl towards the snake. 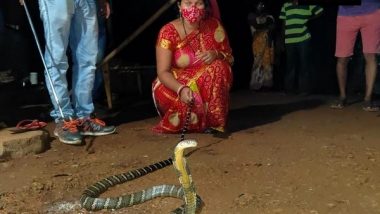 Mayurbhanj, June 6: An 8-foot long king cobra was rescued by a woman in Odisha's Mayurbhanj on Saturday from near her house. The woman, Sasmite Gochhait, and her husband Akil Munda were in for a scare when they saw their 2-year-old child crawl towards the snake.

Munda grabbed his son and jumped out the window while Gochhait, who has never touched a snake before this, grabbed the reptile. "As soon as I saw my baby crawl towards the cobra I grabbed him and jumped out the window to call officials. We went to call range officer Krishna Gochhait and told him about the incident. He rushed home with me," he added. Assam: 16-Foot-Long King Cobra Rescued at a Tea Estate in Nagaon (See Pics).

Odisha: A woman rescued a King Cobra who entered a residential area in Mayurbhanj

"It was found in front of a house of a local. I rescued it and released it in its habitat with the help of the forest department and Range Officer," said Sasmita Gochhait (05.06) pic.twitter.com/dCfsaAkrSs

"I and my husband rushed to the village. It was the first time I have caught the King cobra inside a house. We released it in its habitat. I am very thankful to the forest department and range officer who helped us in this situation," Sasmita told ANI.