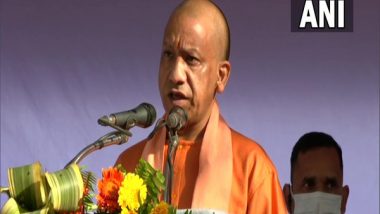 The programme has been launched under the National Food Security Act.

Addressing the occasion, the chief minister said, "The state government is taking forward the free ration distribution scheme of the prime minister today.

The world is under the third wave of the Corona pandemic. During the pandemic, Prime Minister Narendra Modi rolled out free food distribution scheme that benefitted 80 crore poor people. The scheme was started by the state government as well benefitting nearly 15 crore people. Uttar Pradesh government also distributed free food grains for a term of 3 months."

Yogi said that the Centre and the state are ready to fight the third wave of COVID-19 in case if it arrives in the country.

Alleging that the food used to be diverted from Uttar Pradesh to other states under the previous governments, he said that the scheme is being implemented in a transparent way under his government.

"The entire scheme is being implemented in a transparent way. Before 2017, the food used to go to the food mafia and this food used to be sent from Uttar Pradesh to some other state. During the rule of the previous government, death by starvation was seen," he said.

The scheme was launched in March 2020. Under PMGKAY, the Centre provides five kg rice or wheat free of cost to every poor person every month in the wake of the COVID-19 pandemic.