Amid heavy rainfall, about 30 families were evacuated to a safe zone from Anthoniyar Colony in Munnar after receiving a siren from the Disaster Warning System. 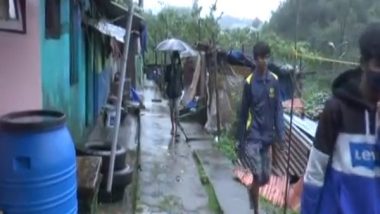 Visual from Anthoniyar Colony from Munnar.

Idukki (Kerala), July 25 (ANI): Amid heavy rainfall, about 30 families were evacuated to a safe zone from Anthoniyar Colony in Munnar after receiving a siren from the Disaster Warning System.

As heavy rain is predicted till Monday in various parts of the state, Munnar has recorded the highest rainfall till now.

"After the information was reported to the State Disaster Management Authority, the government led evacuation measures were expedited. The families were shifted to Mount Carmel Auditorium," said Munnar Village officer KV Jhonson.

The siren went off on Saturday, the same day when years back on July 24, 2005, six residents of Anthoniyar Colony were killed when a landslide hit their house. The Early Disaster Warning System was set up by the Amrita Institute after the 2005 disaster. The system is powered by geological sensors and 10 wireless sensor nodes.

"During the Pettimudi tragedy too the bridge was damaged which slowed the entire rescue process. The bridge was constructed last year but the road has caved in," said Manikyan a local resident.

However, many families were reluctant to move initially as they complained that they were promised better housing facilities on alternative land by the government after the 2005 landslide but nothing has been done so far.

Meanwhile, a mudslide was reported in the Munnar-Devikulam route and a road caved in near Periyavara bridge in the inter-state highway near Munnar disrupting the traffic. Only small vehicles are allowed to pass through the road and heavy vehicles have not been allowed to do so.

Devikulam MLA A Raja who visited the place said that efforts are being made to facilitate things without any traffic jams. (ANI)