India News | Amit Shah Lashes out at KCR, Says TRS Govt Does Nothing Except Changing Names of Central Schemes

Get latest articles and stories on India at LatestLY. Union Home Minister Amit Shah on Saturday lashed out at the Telangana Rashtra Samithi government in the state asserting that Chief Minister K Chandrashekhar Rao's government of Telangana does nothing except changing the names of Central schemes. 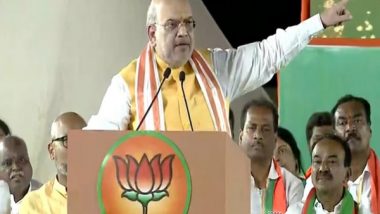 Rangareddy (Telangana) [India], May 14 (ANI): Union Home Minister Amit Shah on Saturday lashed out at the Telangana Rashtra Samithi government in the state asserting that Chief Minister K Chandrashekhar Rao's government of Telangana does nothing except changing the names of Central schemes.

Addressing a public meeting on the concluding day of Praja Sangrama Yatra in the Tukkuguda area of Rangareddy in Telangana, Shah said, "PM Modi has done many things for the development and people of Telangana. Chandrashekhar Rao's government of Telangana does nothing except change the names of PM Modi Ji's schemes."

On April 19, the death of a 25-year-old BJP worker in Telangana's Khammam area triggered a tense situation in the town. The BJP worker Sai Ganesh died while undergoing treatment at a private hospital in Hyderabad, and his body was brought to Khammam town in the evening, triggering violent protests from the BJP workers. The BJP workers had alleged harassment by the police and Telangana Rashtra Samithi (TRS) leaders.

Speaking on this issue, Amit Shah today said, "BJP workers are being killed in broad daylight today. This Chandrashekhar Rao wants to turn Telangana into Bengal, will you allow this to happen? They have to stop. I will ensure that the killers of BJP worker Sai Ganesh get punished."

The senior BJP leader, whose party won two assembly by-polls and the Greater Hyderabad Municipal Corporation (GHMC) election in the last two years, expressed confidence in the BJP coming to power in the state in the hustings next year and urged the voters to elect the saffron party to usher in a secure and prosperous Telangana.

"In the 2019 elections, the people of Telangana gave 4 seats to the BJP, we lost 2 seats by a very close margin. But in the previously held Hyderabad Municipal Corporation elections and 2 by-elections, you have made BJP victorious."

The first phase of the 'yatra', which began in August 2021, was held for 36 days covering 19 Assembly constituencies in eight districts last year starting from Hyderabad and traversing Rangareddy, Vikarabad, Sangareddy, Medak, Kamareddy, Sircilla and Siddipet.

Through the 'yatra', the BJP has been projecting the party's strength in the state.

State BJP leaders expect that the meeting will boost the morale of the party and gear up the cadre for the next year's Assembly elections. (ANI)