Last month, NIA had arrested Inspector of the Mumbai Police Crime Branch, Sunil Mane for his involvement in the case. 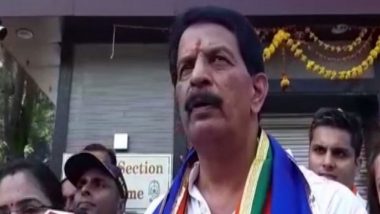 According to sources, Sharma is being taken to the JJ Hospital for the medical test and will be produced before a court later today. Earlier, in the day, the NIA had conducted a raid at the residence of the Shiv Sena leader. More details on the matter are awaited.

This comes after the NIA had arrested two more persons in connection with the Antilia bomb scare case on June 15. Last month, NIA had arrested Inspector of the Mumbai Police Crime Branch, Sunil Mane for his involvement in the case.

Sachin Waze, the prime accused of placing an explosives-laden vehicle near Reliance Industries Chairman Mukesh Ambani's house Antilia in Mumbai on February 25, has been arrested by the NIA earlier.

Waze was also accused of the murder of Mansukh Hiren, the owner of the vehicle that was found containing explosives materials outside Antilia. Waze, an API in the Crime Intelligence Unit (CIU) of Mumbai Police was dismissed from service in May 2021.