Get latest articles and stories on India at LatestLY. Biplab Kumar Deb, who resigned as Tripura Chief Minister on Saturday, said he would work as "a common worker" for the BJP to return to power in the state. 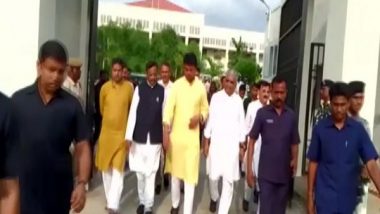 Agartala (Tripura) [India], May 15 (ANI): Biplab Kumar Deb, who resigned as Tripura Chief Minister on Saturday, said he would work as "a common worker" for the BJP to return to power in the state.

"The party [BJP] is above all. I have worked for the party under the leadership and directions of Prime Minister Narendra Modi. I have tried to do justice to the people of Tripura as the head of the party's state unit and as CM. I have tried to ensure peace and development and steer the state out of the COVID crisis. The party wants a responsible organiser to assume charge of affairs ahead of the state assembly election," Deb told the media here.

Asked if he was feeling emotional on demitting office, Deb said there is a time limit for everything.

"We can fit in any role, be it a Chief Minister or an ordinary BJP worker. To strengthen the base of the BJP in the state, I need to work on the grassroots level in various sectors. I should work as a common karyakarta (party worker) rather than being in the position of CM to form BJP government again in the coming assembly elections," he said.

In a tweet, he thanked the central leadership and people of Tripura for giving him the responsibility to serve Tripura as a Chief Minister.

"I have wholeheartedly served my State and will always work for the betterment of my State. Tripura shall definitely march ahead in the path of devt. Jai Hind," he said.

Trinamool Congress took potshots at BJP and Deb over his stepping down as chief minister in election year.

"@BJP4India, trust me CHANGE ALL THE CMs YOU WANT, you will still not find a place in the hearts of the people of #Tripura!But of course, good riddance@BjpBiplab," Trinamool Congress MP Kakoli Ghosh Dastidar said in a tweet.

The opposition party alleged that Deb had failed the people of Tripura and there will be a change in the assembly polls in the state next year.

"Goodbye and good riddance to the CM who failed thousands of people in #Tripura! Enough damage done. So much so that even the top bosses at @BJP4India are fed up of his INCOMPETENCE. Folks at BJP seem very rattled by what @AITCofficial achieved in the state. CHANGE IS INEVITABLE," Trinamool Congress said in a tweet.

Deb had taken oath as the first Chief Minister of Bharatiya Janata Party in the state in 2018 ending the 25-year-rule of the Communist Party of India in Tripura. (ANI)