BJP Condemns Cutting Down of Trees, a Day After World Environment Day 2021, in Mumbai’s Worli, Calls It ‘Shameful Act’

Around 25-30 trees have been brought down in Worli. We condemn the act. We have come here to visit and take a note of the situation." 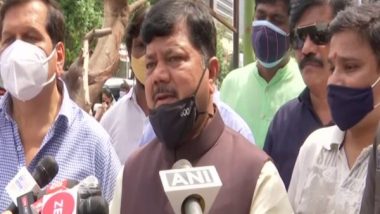 Mumbai, June 6: A day after World Environment Day, as many as 25-30 trees were cut down in Worli, Mumbai, said Pravin Darekar, Leader of Opposition (LoP) in the Maharashtra Legislative Council on Sunday, stating it as a shameful act.

Speaking to media persons, BJP leader Darekar said, "It is a very shameful act that a day after celebrating World Environment Day, trees were cut down. Around 25-30 trees have been brought down in Worli. We condemn the act. We have come here to visit and take a note of the situation." Mumbai: Narrow Escape for Woman as Giant Tree Falls on Street Amid Heavy Rains Due to Cyclone Tauktae (Watch Video).

He further informed that the Deputy Commissioner of Police Paramjit Singh Dahiya has filed a First Information Report (FIR), however on unknown persons. "This is not our personal issue. It is related to the environment. We want this issue to be looked into," said the LoP.

President of Bharatiya Janata Party's (BJP) Mumbai unit Mangal Lodha had also accompanied Darekar on Sunday to Worli. According to Lodha, the trees were cut down by a gang that puts up illegal hoardings. This incident has taken place in Borivali, Andheri, and Chowpatty areas also, he said.

"Day and night, this is being by a hoarding gang. All hoardings should be audited. If a common man plucks even a leaf, a case is registered. But this hoarding gang has been operating for the past several years in Mumbai," Lodha said.

He further demanded that the state government should file a case and set up a special committee to investigate into the matter.