The Bharatiya Janata Party (BJP) is confident that it would be able to keep its flock together in West Bengal despite Mukul Roy deserting it to rejoin the Trinamool Congress. 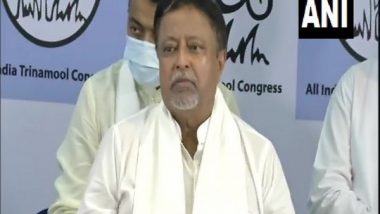 Kolkata (West Bengal) [India], June 11 (ANI): The Bharatiya Janata Party (BJP) is confident that it would be able to keep its flock together in West Bengal despite Mukul Roy deserting it to rejoin the Trinamool Congress.

After Roy, who is still a BJP legislator in Bengal and was appointed party national vice president, went back to Trinamool Congress, BJP is learnt to be keeping a close eye on its members of parliament from the state and the recently elected MLAs in the state assembly.

Party sources said there is no cause to believe that other leaders would be leaving.

"There should be public outrage against Roy for deserting BJP. All of us are in the party and no one is leaving. Even if one or two legislators leave, it doesn't make much difference," said a senior Bengal BJP leader on condition of anonymity.

Roy, who is also named in the Saradha chit fund scam, had joined BJP in 2017.

A former Union Railways Minister, Roy left TMC after he was suspended for six years from the party in September 2017 for "anti-party activities".

It is understood that the central leadership of the BJP has been keeping a close watch on its elected representatives from Bengal since the results of assembly polls last month. Trinamool Congress returned to power with a large majority in the assembly polls.

Sources said BJP is confident that its leaders would be able to resist "any temptation or pressure" from the TMC.

"We are addressing every issue despite the onslaught by TMC government on our cadre. Roy was given a senior post of national vice president in the party, yet he wasn't satisfied," another leader said.

Senior leaders said they had an inkling that Roy would quit the BJP and it was apparent when he didn't turn up at a meeting called by Bengal BJP chief Dilip Ghosh.

Sources stated that there were differences within the party-state unit and the elevation of Suvendu Adhikari as leader of opposition in the Bengal assembly triggered his exit. (ANI)