Get latest articles and stories on India at LatestLY. On the instructions of Chief Minister Pushkar Singh Dhami, the state Health Department has started the facility of health screening at the entry and registration site of Char Dham Yatra, which commenced on May 3. 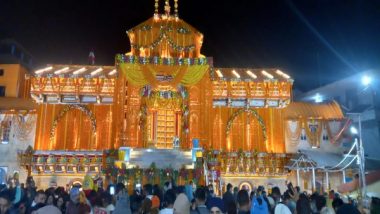 Dehradun (Uttarakhand) [India], May 13 (ANI): On the instructions of Chief Minister Pushkar Singh Dhami, the state Health Department has started the facility of health screening at the entry and registration site of Char Dham Yatra, which commenced on May 3.

Director-General of Health Dr Shailja Bhatt informed, "Health screening of passengers has been started at Rishikesh ISBT registration site. A health screening camp has been set up at Pandukeshwar for the pilgrims of Dobata and Hina and Badrinath Dham on the Yatra route of Yamanotri and Gangotri respectively."

After the health screening, the passengers who are found to have any kind of physical illness, they are being advised to take rest or go on the journey only after becoming fit for health, she said.

She informed that 24x7 Heli Ambulance facility has been kept for the passengers in emergency situations.

After almost two years, Char Dham Yatra commenced, without Covid-19 restrictions since the pandemic began. Unlike the last year, the government has not mandated carrying a negative COVID-19 test report or a COVID-19 vaccination certificate.

The yatra began with the opening of Gangotri and Yamunotri portals for devotees on May 3, on the occasion of Akshay Tritiya in the presence of Chief Minister Pushkar Singh Dhami. While Kedarnath re-opened on May 6, the doors of Badrinath opened on May 8.

According to the Uttarakhand government, 7,000 pilgrims will be allowed daily at Gangotri, 15,000 at Badrinath, 12,000 at Kedarnath, and 4,000 at Yamunotri. This arrangement has been made by the government for 45 days. Notably, Gangotri, along with Yamunotri, Kedarnath and Badrinath are the four most revered Hindu pilgrimages in the Himalayas. (ANI)