Get latest articles and stories on India at LatestLY. Senior Congress leader V Hanumantha Rao Friday slammed the Telangana government for running wine shops in the state and called for making Telangana an alcohol-free state. 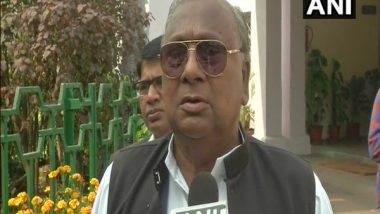 Speaking to ANI today, Rao said, "Telangana Chief Minister K Chandrashekar Rao is running the state government on revenue earned from wine shops. Earlier, in Amberpet Constituency, there used to be only one wine shop in an area. Now, there are a total of 20 wine shops located in this constituency."

"Due to this, the mindset of the youth aged between 18-20 years is getting spoiled. People of Telangana are becoming alcoholics. In Delhi, there is only one wine shop in an area of 3-4 kilometres. See development in states like Bihar and Gujarat that are alcohol-free. Why can't our state become like that?" he asked.

The Congress leader alleged that after consuming alcohol, people are committing crimes at a higher rate. Rao said he will speak to Congress leader Rahul Gandhi and conduct a meeting with Telangana Congress leaders on this issue and come up with a solution. (ANI)