The UN climate summit in Egypt concluded on Sunday with a landmark decision to establish a fund to address loss and damage, but the outcome on other crucial issues such as India's call for phasedown of all fossil fuels reflected little progress. 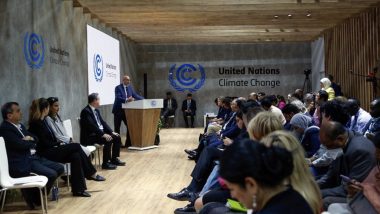 New Delhi, Nov 20: The UN climate summit in Egypt concluded on Sunday with a landmark decision to establish a fund to address loss and damage, but the outcome on other crucial issues such as India's call for phasedown of all fossil fuels reflected little progress.

The climate talks this year were held in the shadow of the Russian aggression in Ukraine and the related energy crisis which has strained the capabilities of countries to urgently tackle climate change. The deal, even if not very convincing, will only reinforce the global resolve to fight climate change. Mangaluru Autorickshaw Blast: Tamil Nadu Police Detain One Suspect for Questioning.

India termed COP27 "historic" for securing an agreement on establishing a fund to address loss and damage due to climate change-induced disasters, saying "the world has waited far too long for this".

"For India, there were many positives to be drawn from COP27. The most significant for us was the inclusion of sustainable lifestyle in the Sharm El-Sheikh Implementation Plan," Union Environment Minister Bhupender Yadav said.

"It is Prime Minister Shri Narendra Modi who has made the pitch for an environmentally-friendly lifestyle, through his mantra of Mission LiFE and the world today moved in that direction," he said. On COP27 establishing a work programme on climate action in agriculture and food security, Yadav said the responsibilities to reduce emissions should not be shifted to smallholder farmers.

Opposing the efforts to extend the scope of mitigation to agriculture at COP27, India had Thursday said rich nations do not want to reduce emissions by changing their lifestyles and are "searching for cheaper solutions abroad".

Agriculture accounts for around 17 per cent of India's GDP and is the primary source of livelihood for about 58 per cent of its population.

The summit was scheduled to conclude on Friday but went into overtime as negotiators pushed for an agreement on issues such as mitigation, loss and damage fund and adaptation. At one point in time, the talks veered close to a collapse but gained momentum in the final hours after progress on a new finance facility to address loss and damage, a long-pending demand of poor and developing countries, including India, and the key element at this year's UN climate summit. The success of the talks hinged on progress on this track.

Developed nations, particularly the US, had opposed this new fund over fears that it would hold them legally liable for massive damages caused by climate change. COP27 Scripts History, Approves 'Loss and Damage' Fund for Vulnerable Countries Impacted by Climate Change.

Not everyone seemed satisfied with the final package but chose not to intervene as it would have risked the loss and damage deal that poor and vulnerable nations wanted for long. The hope at COP27 was to include a phasedown of all fossil fuels, including oil and gas, as proposed by India and backed by many developed and developing countries including the EU and the US, but the final agreement did not essentially build on what was agreed upon in COP26.

However, when compared to COP26, the summit this year has brought in stronger language on renewables and included the just transition principles while bringing up energy transition, experts said. Another sharp message from COP27 is to reform multilateral development banks to provide more climate finance without forcing developing countries deeper into debt, they said.

The Sharm-El Sheikh Implementation Plan reaffirmed the Paris Agreement goal of holding the increase in the global average temperature to well below 2 degree Celsius above pre-industrial levels, recognising that this would "significantly reduce the risks and impacts of climate change".

Shruti Sharma, Senior Policy Advisor, International Institute for Sustainable Development said it is disappointing that COP27 did not build on the COP26 statement to deliver a stronger message on phaseout of fossil fuels.

"COP26 asked parties to, among other things, transition to low energy systems through the phasedown of unabated coal phase down. The hope at COP27, through India's proposal, was to include a phaseout of all fossil fuels, including coal oil and gas. Perhaps the most significant milestone for this COP has been the creation of a loss and damage fund," she said.

"COP27 has been a tough pill to swallow but in the end there has been more progress than was anticipated. The negotiators have debated on language but in the big picture, the world has saved one year from being wasted by not compromising on the language on 1.5 degrees temperature rise," said Aarti Khosla, Director, Climate Trends. The countries fell short of agreeing to a phasedown of all fossil fuels, which speaks to the energy crisis and the hold of the oil and gas lobby at this COP, she said.

Pallavi Das, Programme Associate, Council on Energy, Environment and Water, said "At COP27, India negotiated from a position of strength and ensured that the debate moved from coal phase out to fossil phase down. This push exposed the hypocrisy of oil and gas producers, mainly the USA and Saudi Arabia, and the text settled on coal phase down, as in the case of Glasgow.

"India should continue to corner gas and oil producing countries to ensure that the world is on track to achieve the 1.5 Deg C target."

Bhavreen Kandhari from Warrior Mom, a network of mothers pushing for clean air and climate action, said COP27 should have made an unambiguous agreement to phase out all fossil fuels. "Our children need a rapid and just transition to life-saving clean, renewable energy. As mothers and fathers, grand-parents and caregivers, we are resolved to keep fighting for all children and their right to breathe clean air and grow up on a healthy planet," she said.