Delhi logged 17 more deaths due to Covid and around 19,000 infections on Monday, with one in every four persons undergoing testing turning out to be positive, as authorities announced new curbs but decided against imposing a full lockdown. 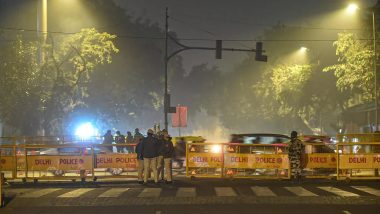 New Delhi, Jan 10: Delhi logged 17 more deaths due to Covid and around 19,000 infections on Monday, with one in every four persons undergoing testing turning out to be positive, as authorities announced new curbs but decided against imposing a full lockdown.

The Disaster Management Authority (DDMA), which formulates Covid management policies for the capital, however, suspended the dine-in facility at restaurants and closed bars in view of the rising cases in the city.

According to government data, 70 Covid patients have died in the capital in the first 10 days of January. It reported 17 fatalities each on Sunday and Monday. COVID-19 Curbs in Delhi: Dine-in Service in Restaurants and Bars Banned Amid Rising Coronavirus Cases.

It recorded 54 fatalities in the last five months -- nine in December, seven in November, four in October, five in September and 29 in August. In July, the virus had claimed 76 lives in the capital.

Government data showed that of the 46 patients who died between January 5 and January 9, as many as 34 had comorbidities such as cancer and heart and liver diseases, while 25 were aged above 60. Only 11 of the 46 were vaccinated against the coronavirus.

The positivity rate of 25 percent reported on Monday is the highest since May 4 last year. The number of new infections (19,166) was low as compared to Sunday as only 76,670 tests (comparatively lower number) were conducted the previous day.

After a DDMA meeting to discuss ways to strictly enforce existing restrictions, Lieutenant Governor Anil Baijal said, “In view of the increase in positive cases, it was decided to close restaurants and bars and to allow 'takeaway' facility only."

Currently, restaurants and bars are allowed to operate at 50 per cent of their seating capacity.

“It was also decided to allow operation of only one weekly market per day per zone,” Baijal tweeted.

Officers were also advised to strictly ensure people wear masks and adhere to social distancing norms in markets and public areas to break the chain of transmission.

The authority discussed that restrictions imposed in Delhi should be extended in the National Capital Territory Region in view of the unhindered flow of people between the NCR cities.

It was also discussed if the seating capacity in Metro trains and city buses can be reduced from 100 percent at present to 50 percent, officials said.

On Sunday, Chief Minister Arvind Kejriwal had said that the hospitalisation rate is low and that there will be no need of a lockdown if everyone wears a mask.

“There is no plan to impose a lockdown as of now,” he had said. The Delhi government has already announced night and weekend curfews, among other restrictions, to check the spread of the coronavirus.

The government has repeatedly stressed that most Covid cases this time are mild or asymptomatic, not requiring hospitalisation.

According to the latest health bulletin, 1,912 Covid patients are in hospitals. Of them, 65 are on ventilator support.

According to Sutra -- a mathematical model developed by scientists at IIT Kanpur and IIT Hyderabad -- Delhi is likely to record 35,000 to 70,000 infections at the peak of the third wave around January 15.

Kejriwal had earlier said his government has made preparations to handle one lakh patients, conduct three lakh tests daily and ensure availability of enough manpower, medicines and medical oxygen.