The landfall process of Cyclone Yass started around 9 am on Wednesday between Dhamra and Balasore in Odisha and is expected to continue for about three to four hours, said Odisha Special Relief Commissioner PK Jena on Wednesday. 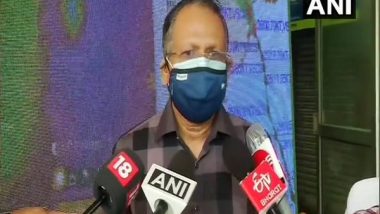 New Delhi, May 26: The landfall process of Cyclone Yass started around 9 am on Wednesday between Dhamra and Balasore in Odisha and is expected to continue for about three to four hours, said Odisha Special Relief Commissioner PK Jena on Wednesday.

While speaking to the media, he further said that the tail of the cyclone is expected to completely move to the landmass by 1 pm.

"Landfall process started around 9 o'clock and is expected to continue for 3-4 hrs. It's expected that by around 1 pm, the tail end of the cyclone will also be completely moving to landmass. It is making landfall between Dhamra and Balasore," Jena said. Cyclone Yaas: Ahead of Landfall, NDRF Team Evacuates an Elderly Woman and 6-Month-Old Child to a Shelter in Odisha's Jajpur (Watch Video).

The India Meteorological Department too confirmed that the landfall process started between 8:30 and 9 am on Wednesday.

People in Odisha, West Bengal and Jharkhand woke up to strong winds and heavy rain on Wednesday morning and braced for the cyclone.

As a precaution, Kolkata airport has closed for operations from 8.30 am to 7.45 pm and no flights will be operating to or from Kolkata, officials said.

Railways also announced the cancellation of 38 long-distance South-bound and Kolkata-bound passenger trains from May 24 to 29 in view of the impending cyclone.

Over 11.5 lakh people were on Tuesday were evacuated from vulnerable areas in West Bengal to prevent deaths and injuries ahead of the impending landfall of the cyclone Yaas.

Two persons had been electrocuted and at least 80 houses damaged in Hooghly and North 24 Parganas districts due to strong winds and heavy rainfall on Tuesday.

West Bengal chief minister Mamata Banerjee had informed that 74,000 employees of the state government have been engaged in the relief work.

Evacuated people have been moved to over 8,000 flood shelters and schools and colleges. She spent the night in the state secretariat, Nabanna, reviewing preparations for the cyclone.

Odisha Chief Minister Naveen Patnaik also held a meeting with Chief Secretary and Special Relief Commissioner (SRC) through a virtual platform linking the state control room and cyclone dashboard. Patnaik sought the cooperation of people in evacuation and directed the administration to monitor the situation regularly.