Delhi Mayor Elections 2023 to Be Held Today Amidst Heavy Security

AAP MLA Saurabh Bharadwaj has questioned the heavy security deployment outside the civic centre. Sharing a video he tweeted in Hindi, "Today BJP has brought force with sticks to take possession of Municipal Corporation. Have you seen this in any House?" 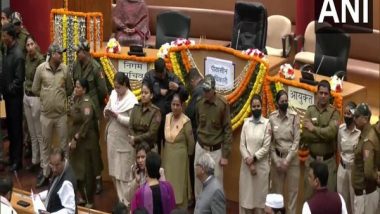 New Delhi, January 24: Elections to the coveted posts of Mayor and Deputy Mayor of the Municipal Corporation of Delhi (MCD) is scheduled to begin here on Tuesday, after the process was adjourned nearly three weeks ago following acrimonious scenes between the Aam Aadmi Party and the Bharatiya Janata Party (BJP) councillors.

Besides elections to six members of the Standing Committee from the House will be also be conducted today. Heavy security was seen deployed at the Civic centre, the headquarters of the MCD where the House is scheduled to begin today. Delhi Mayor Election: Aldermen to Take Oath First, Says Presiding Officer Despite AAP's Opposition.

The mayoral elections will begin after oaths are administered in the House to aldermen and the newly elected councillors. The House will be presided over by BJP councillor Satya Sharma, who has been appointed presiding officer by the lieutenant governor (LG) VK Saxena.

AAP MLA Saurabh Bharadwaj has questioned the heavy security deployment outside the civic centre. Sharing a video he tweeted in Hindi, "Today BJP has brought force with sticks to take possession of Municipal Corporation. Have you seen this in any House?"

Aam Aadmi Party, which won the MCD polls, with 134 seats has fielded Shelly Oberoi for the mayor's post while Rekha Gupta, a three-term councillor from Shalimar Bagh, is the BJP's nominee.

For the deputy mayor post, the AAP has fielded Aaley Mohammad Iqbal and the BJP has fielded Ram Nagar councillor Kamal Bagri. Seven candidates are in the fray for six posts of the Standing Committee. The Aam Aadmi Party has fielded Amil Malik, Raminder Kaur, Mohini Jeenwal and Sarika Chowdhary while the BJP has fielded Kamaljeet Sehrawat, Gajendra Daral and Pankaj Luthra.

Seven Lok Sabha MPs of Delhi, three Rajya Sabha MPs and 14 MLAs are among the among those nominated ho have been made on the consent of the Speaker of the Delhi Legislative Assembly, will also take part in the voting. On January 6, high drama ensued in the house for over an hour as Delhi was all set to elect its first single mayor in 10 years after the Municipal Corporation of Delhi was unified last year.

High pitched ruckus was heard in the MCD House as the presiding officer invited alderman Manoj Kumar to take oath first. The presiding officer, MCD commissioner and other officials left the House after the ruckus. Councillors from both parties clashed and then took to protests with sloganeering against each other ahead of the Delhi Mayor polls in early this month. Marshals had to make their presence felt as several councillors were injured in the process.

The BJP had claimed that its councillors Inder Kaur, Anita Deoli and Kamaljeet Sherawat sustained injuries during the protest while AAP took to social media to list its injured. Delhi Set to Get a Woman Mayor as Elections for the Post to Be Held at 11.00 AM Today.

"There was a fatal attack on our councillor in the MCD House. BJP councillors are involved in the attack," AAP MLA Saurabh Bharadwaj said. The AAP, which ended the 15-year-long reign of the Bharatiya Janata Party in the MCD polls held on December 4, has cried foul play over Delhi LG VK Saxena's decision to appoint BJP councillor Satya Sharma as the presiding officer of MCD and 10 aldermen to the civic body.