Get latest articles and stories on India at LatestLY. The Enforcement Directorate (ED) has filed a Supplementary Prosecution complaint against two leaders of the Popular Front of India (PFI) under the provisions of the Prevention of Money Laundering Act, 2002 (PMLA) before the Special PMLA Court, Lucknow with a prayer for awarding punishment to the accused. Cognizance of the offence of money laundering has been taken by the Court. 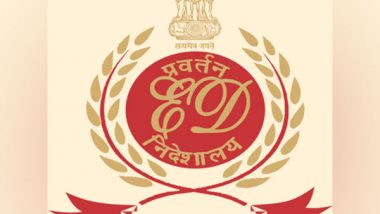 New Delhi [India], May 14 (ANI): The Enforcement Directorate (ED) has filed a Supplementary Prosecution complaint against two leaders of the Popular Front of India (PFI) under the provisions of the Prevention of Money Laundering Act, 2002 (PMLA) before the Special PMLA Court, Lucknow with a prayer for awarding punishment to the accused. Cognizance of the offence of money laundering has been taken by the Court.

Earlier, a Prosecution Complaint had been filed by the ED on February 6, 2021, against five office bearers/ members of PFI and its student wing Campus Front of India. Cognizance of the offence of money laundering was taken by the Court against all the accused, an official statement by the law enforcement agency said. The Supplementary Prosecution Complaint has been filed against PFI leaders Abdul Razaq Peediyakka and Asharaf Khadir who, in association with other PFI leaders and members associated with overseas entities were developing a residential project - Munnar Villa Vista Project (MVVP) at Munnar, Kerala with a motive to launder money collected from foreign countries as well as within the country and to generate funds for PFI to finance its radical activities. The investigation established that 'proceeds of crime' in the form of unaccounted and unexplained cash as well as foreign funds were parked in MVVP and were projected as untainted. The investigation revealed that Abdul, a long time dedicated member of PFI and its related entities, who also served as PFI Divisional President for Perumpadappu, Malappuram, Kerala, was a key figure representing such organizations' in the Gulf countries and was actively involved and instrumental in the fund-raising activities of PFI in India and abroad. He transferred around Rs. 34 lakh from UAE to Rehab India Foundation (RIF)--a front organization of PFI.

Similarly, he transferred Rs 2 lakh to MK Faizy --president of the Social Democratic Party of India (SDPI) - a political front of PFI. An investigation also revealed that he was involved in raising/ collecting funds abroad and he transferred around Rs 19 crore to India through underground/illegal channels. Similarly, an investigation revealed that Ashraf, a member of PFI Kerala State Executive Council [previously PFI President of Ernakulam District], who was also originally arraigned by the NIA as an accused in Professor Joseph hand-chopping case of 2010, actively participated in the activities of PFI's related entities such as SDPI, CFI, etc and that he was also involved in the funding of PFI as well as the related entities. He was the owner of Darbar restaurant in Abu Dhabi which served as a money-laundering front of PFI. However, to conceal the laundering of proceeds of crime through Darbar restaurant, he did not disclose the fact of ownership of Darbar restaurant before the Government Authorities.

Abdul was involved with him in carrying out the money laundering activities of PFI and related entities through Darbar restaurant. He received proceeds of crime of around Rs 48 lakh from his brother who was managing Darbar restaurant in Abu Dhabi. Another company owned by him Tamar India Spices Pvt Ltd --was also used to launder proceeds of crime. During the investigation, both Abdul and Ashraf were arrested under the provisions of Section 19 of the PMLA for the offence of money laundering. Proceeds of crime amounting to around Rs 22 crore have been identified in the present Supplementary Prosecution complaint filed by the ED. Thus, PMLA investigation has revealed that Abdul Razak BP and Ashraf MK, with the active association and involvement of other PFI members, hatched a criminal conspiracy to raise funds in India and abroad and fraudulently transferred the funds through underground and illegal channels.

Further investigation regarding the money laundering activities of PFI and its related organizations and the use of such funds in various unlawful activities is underway and more Supplementary Prosecution Complaints shall be filed in future. (ANI)