On the occasion of Id-ul-Adha on Wednesday, the Border Security Force (BSF) and Pakistan Rangers exchanged sweets at various points along the border, the first time since the Pakistani side shunned the custom in 2019. 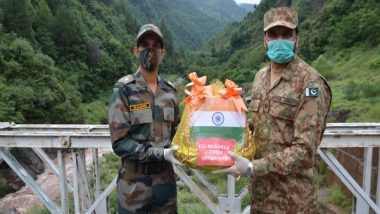 Troops of BSF and Pakistan Rangers exchangimng sweets on the occasion of Eid-Ul-Adha, at the Indo-Pak Border in Jammu.

Jammu (Jammu and Kashmir) [India], July 22 (ANI): On the occasion of Id-ul-Adha on Wednesday, the Border Security Force (BSF) and Pakistan Rangers exchanged sweets at various points along the border, the first time since the Pakistani side shunned the custom in 2019.

The Pakistani side had unilaterally stopped the exchange since August 5, 2019, when the Central government abrogated provisions of Article 370 of the Constitution which gave special status to Jammu and Kashmir.

A BSF spokesperson said that "exchange of sweets took place between BSF and Pakistan Rangers on the occasion of Eid. Both side troops greeted each other and exchanged sweets in Hira Nagar, Samba, Ramgarh, RS Pura, Arnia, Pargwal Sectors of the International Border of Jammu."

"This is the first exchange of sweets between the two border guarding forces (BSF and Pakistan Rangers) after the Pulwama incident (in 2019)," the official added.

There was no cross-border shelling for long and farmers on both sides of the border have been able to carry out their farming activities peacefully, the Jammu frontier of the BSF said in a statement.

Prime Minister Narendra Modi on Wednesday extended his wishes to the people on the occasion of Eid-ul-Adha.

"Eid Mubarak! Best wishes on Eid-ul-Adha. May this day further the spirit of collective empathy, harmony and inclusivity in the service of greater good," PM Modi said in a tweet.

The festival marks the end of Hajj and involves animal sacrifice as a symbol of Ibrahim's sacrifice to Allah. (ANI)