India News | Farmers to Campaign Against BJP in UP Assembly Polls

Farmers protesting against the Central farm laws on Thursday announced a "Mission Uttar Pradesh" campaign to be started from September 5 ahead of the 2022 Assembly elections in the state. 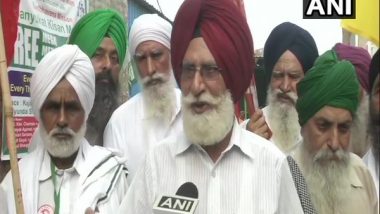 New Delhi [India], July 22 (ANI): Farmers protesting against the Central farm laws on Thursday announced a "Mission Uttar Pradesh" campaign to be started from September 5 ahead of the 2022 Assembly elections in the state.

Speaking to ANI, at Singhu border, farmer leader Prem Singh Bhangu said, "Our next stop will be Uttar Pradesh, BJP's heartland. Our Uttar Pradesh mission will begin on September 5. We will totally isolate BJP. There is no alternative other than to repeal three farm laws. We are ready for talks.

Uttar Pradesh Assembly polls are scheduled to be conducted next year. In 2017, the BJP won a landslide victory winning 312 Assembly seats. The party secured a 39.67 per cent vote share in the elections for 403-member Assembly. Samajwadi Party (SP) bagged 47 seats, BSP won 19 while Congress could manage to win only seven seats.