Get latest articles and stories on India at LatestLY. Former Union Finance Minister and senior Congress leader P Chidambaram on Saturday said that the Centre should extend the Goods and Services Tax (GST) compensation period by at least three years. 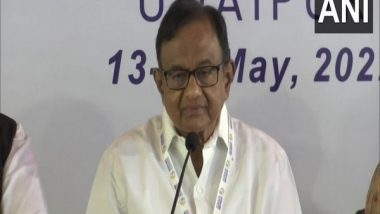 Addressing a press conference on the second day of Congress Chintan Shivir here, Chidambaram slammed the BJP-led government over its management of the economy.

"The state of the Indian economy is a cause of extreme concern. A slower rate of growth has been the hallmark of the present government in the last 8 years. The post-pandemic recovery has been indifferent and halting. The growth estimates of 2022-23 have been lowered from time to time in the last five months," he said.

Congress leader said that inflation has risen to "unacceptable levels, and threatens to rise further".

"WPI inflation is at 14.55 per cent and CPI inflation is at 7.79 per cent. The government is actually fueling the rise of inflation by its wrong policies, especially through high taxes on petrol and diesel, high administered prices and high GST tax rates," he said.

Chidambaram said the job situation has never been worse. "The Labour Force Participation Rate (LFPR) is at a historic low of 40.38 per cent and the unemployment rate stands at 7.83 per cent," he said.

Answering a query on GST compensation, Chidambaram said the compensation period for states should be extended.

"On the GST, we believe that the compensation period of five years that will expire on June 30, 2022, must be extended. It must be extended by at least another three years. We would strongly disapprove if any attempt is made by the Central Government or the Union Finance Minister to railroad the GST council and prevent it from recommending an extension of the GST compensation period by another three years. We will strongly oppose that and we will insist that it will be extended," he said.

The minister said the time is ripe for a comprehensive review of Centre-States fiscal relations.

"The consequences of the poorly-drafted and unfairly-implemented GST laws brought in by the Modi government in 2017 are there for everyone to see. The States' fiscal position is fragile as never before and needs urgent remedial measures," he said.

Answering a query on the Centre's decision to ban wheat export, he said it has been done as the government has failed to procure enough wheat.

"I presume that it is because the Central Government had failed to procure enough wheat. It's not that wheat production has come down. It is more or less as the same, in fact, it may be marginally more. Yesterday I was told by the Chhattisgarh Chief Minister that they have been able to procure 97 lakh tonnes of paddy. Let me add, banning export of wheat is an anti- farmer measure. It deprives the farmer of reaping the benefits of higher export prices. It is an anti- farmer measure and I am not surprised that this government has never been very friendly to the farmer," the Congress leader said.

He said that the external situation has added to the pressures on the economy.

"The government appears clueless on the ways to deal with these developments. USD 22 billion has flowed out of the country in the last 7 months. The foreign exchange reserves have depleted by USD 36 billion. The exchange rate stands at Rs 77.48 to a dollar, the highest ever," he said.

Chidambaram said a Congress-led government ushered in a new era of liberalisation in 1991 and the country has reaped enormous benefits in terms of wealth creation, new businesses and new entrepreneurs, a huge middle class, millions of jobs, exports and lifting 27 crore people out of poverty during a 10-year period.

"After 30 years, it is felt that taking into account global and domestic developments, it may be necessary to contemplate a re-set of the economic policies. A re-set of economic policies must also address the questions of rising inequalities; extreme poverty among the bottom 10 per cent of the population; India's rank in the Global Hunger Index 2021 (101 out of 116 countries); and evidence of widespread nutritional deficiency among women and children."

He said a comprehensive review would also be justified by the health and education outcomes as revealed by the Annual State of Education Report 2021 (ASER 2021) and the National Family Health Survey-5 (NFHS-5).

"We believe that a re-calibration of economic policies can influence health and education outcomes. We believe that we must prepare the Indian economy and the Indian workforce to adapt to the ways in which industry, business and trade will be conducted in the 21st century with the greater use of automation, robotics, machine learning and artificial intelligence," he said.

"We believe that important changes in economic policies will be required in the light of climate change and the need for mitigation and adaptation," he added. (ANI)