Get latest articles and stories on India at LatestLY. Underlining the contribution of the Sikh community in India's independence and nation-building, Prime Minister Narendra Modi on Saturday said that Guru Tegh Bahadur's valour and his sacrifice against Aurangzeb teaches how the country fights against terror and religious extremism. 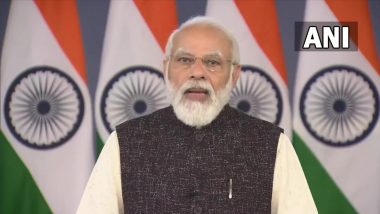 New Delhi, December 25: Underlining the contribution of the Sikh community in India's independence and nation-building, Prime Minister Narendra Modi on Saturday said that Guru Tegh Bahadur's valour and his sacrifice against Aurangzeb teaches how the country fights against terror and religious extremism.

Virtually addressing the Gurpurab celebrations at Gurudwara Lakhpat Sahib in Kutch of Gujarat, the Prime Minister said, "The contribution of our Gurus is not limited to society and spirituality only. It is the great penance of the Sikh Gurus at the core, that the faith and integrity of our nation is safe today. Guru Nanak Dev ji and our different gurus not only kept the consciousness of India ignited but also made a way to keep India safe."

"Guru Tegh Bahadur's valour against Aurangzeb teaches us how the country fights against terror and religious extremism. Similarly, the life of the tenth Guru, Guru Gobind Singh Sahib is also a living example of tenacity and sacrifice at every step. The way the country gave him the title of 'Hind ki Chadar', shows the attachment of every Indian towards the Sikh tradition," stated the Prime Minister. PM Modi Remembers Atal Bihari Vajpayee on His Birth Anniversary.

Referring to his US visit, Prime Minister said that that his government brought back more than 150 historical objects including a peshkabja (small sword), on which the name of Guru Hargobind ji is written in Persian from America.

"More recently, we have successfully and safely brought Guru Granth Sahib from Afghanistan to India. What can be a greater experience of Guru's grace than this? Efforts were made at every level in order to spread the message of Guru Nanak Dev ji to the entire world with new energy. The Kartarpur Sahib Corridor which was awaited for decades, our government completed its construction in 2019," he said.

PM Modi said that it has always been a matter of pride for Gujarat that the fourth Gursikh, Bhai Mokham Singh ji who played an important role in the establishment of Khalsa Panth, was from the state.

Every year, from December 23 to December 25, Sikh Sangat of Gujarat celebrate the Gurpurab of Guru Nanak Dev Ji at Gurudwara Lakhpat Sahib.

Guru Nanak Dev had stayed at Lakhpat during the course of his travels. Gurudwara Lakhpat Sahib has his relics including wooden footwear and palki (cradle) as well as manuscripts and markings scripts of Gurmukhi.

According to Prime Minister's Office (PMO), the Gurudwara had suffered damages during the 2001 earthquake. "The then Gujarat Chief Minister, Narendra Modi, had undertaken urgent efforts to ensure repair of the damages," the PMO said.