Hajj 2022: Have Made All Arrangements for Haj, Saudi Arabia to Decide Modalities, Says Mukhtar Abbas Naqvi

"It is a real issue. What has been raised is an important issue. When we are in Opposition, we say that it should be enforceable. "When we are on the ruling side, our position is different. So, all parties should apply their mind and then come to some conclusion," he said. 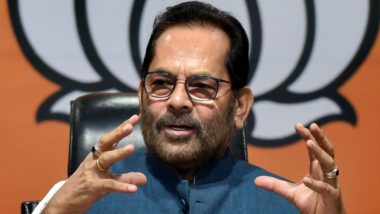 New Delhi, April 5: Minority Affairs Minister Mukhtar Abbas Naqvi on Tuesday said the government has made all arrangements for Haj, but a decision on the modalities has to be taken by Saudi Arabia. The minister said this in Rajya Sabha during the Zero Hour, after Nadimul Haque of the TMC raised the demand for confirmation of date for restoration of Haj-2022.

The Trinamool Congress (TMC) member pointed out that the International Haj Yatra did not take place in the last two years due to the Covid pandemic.

It is the Saudi Arabian government which will decide the modalities of Haj and how many would be permitted for the pilgrimage from India, Naqvi said.

He also informed that during the Modi government, more than two lakh pilgrims have gone for Haj from India. In her Zero Hour mention, Rajani Ashokrao Patil of the Congress made a case for resettling of two-thirds of Asiatic Lions at two or three more places rather than just Gir in Gujarat. Mohsin Raza Takes Charge as Chairman of UP Haj Committee.

Since all Asiatic Lions are in a single population, they remain vulnerable to disease, epidemic, cyclone, and drought, Patil pointed out. In the Serengeti National Park (Tanzania and Kenya), one-third of the 3,000 lions died due to the canine distemper virus within a very short span of a few months, she said.

Such an epidemic can result in the extinction of the Asiatic Lions, she said and added that currently, the distemper virus is killing the Gir lions as well.

According to her, for a viable tiger population, a tiger reserve needs to have a human-free space of over 800 square kilometers.

"The same is true for lions. However, for the only population of Asiatic Lions in the whole world, the exclusive space available is just 250 square kilometers of the Gir National Park," she added. Manoj Kumar Jha (RJD) stressed on the need for changing election laws to make political parties accountable for their poll manifesto.

To this, Chairman M Venkaiah Naidu asked other members, including former prime minister and JDS member H D Devegowda, was it possible to make election manifestos legally binding. Devegowda said, "The only thing is that certain issues need to be discussed on the issue of election manifesto. That is my opinion". Naidu said that political parties should meet, think about this seriously and then move forward in the larger interest of the country.

"It is a real issue. What has been raised is an important issue. When we are in Opposition, we say that it should be enforceable. "When we are on the ruling side, our position is different. So, all parties should apply their mind and then come to some conclusion," he said.

In his mention, Anil Desai of the Shiv Sena suggested to apply the Mumbai city bus transport model in Delhi. He said the discipline which is being maintained by the BEST (Brihanmumbai Electricity Supply and Transport) is very good and having started in 1873, it will be completing 150 years of service to the people.

"My suggestion is that the same discipline and the kind of transportation, which takes place in the city of Mumbai, the same model should be applied in Delhi's public transport, that is, DTC," Desai said. BJD's Prasanna Acharya demanded construction of a memorial in the Asirgarh Fort in Maharashtra to honour freedom fighter Veer Surendra Sai of Odisha, who raised his sword against the Britishers at the age of 17 and throughout his life fought against the Britishers. PMK's Anbumani Ramadoss sought the intervention of the central government in the Cauvery river water dispute.