Get latest articles and stories on India at LatestLY. Ahead of Prime Minister Narendra Modi's rally in Shimla on May 31, BJP Himachal Pradesh President Suresh Kumar Kashyap on Thursday held a meeting with the party's councillors of Shimla Municipal Corporation here. 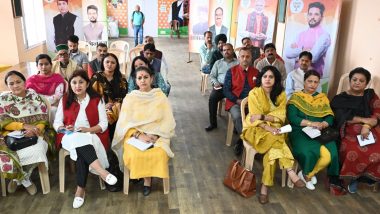 Kashyap said, "It's an honour for us that the world's most popular leader PM Narendra Modi is visiting Shimla on May 31. I would like to welcome him to the state. He will address not only the people of Shimla but the whole nation from the Ridge Maidan. Prime Minister has completed 8 years in power and his tenure is full of achievements. It makes us feel happy knowing that Prime Minister Narendra Modi is coming here."

"As it is a government event, both government and the party are making arrangements. We have held different meetings from the viewpoint of monitoring mobilisation so that as many people attend the event and could listen to his address," he added.

Kashyap informed that he held meetings with BJP Councillors of 34 wards of Shimla Municipal Corporation and has asked them to carry out a door to door campaign and invite people to attend the event. "We are focusing on gathering more than 50,000 people to the event and listening to PM Narendra Modi," he further said.