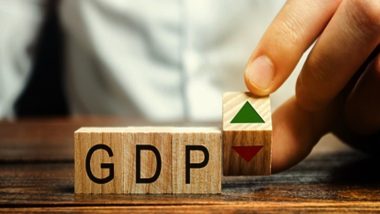 New Delhi, November 30: India's economic growth slowed to 8.4 per cent in the second quarter of 2021-22, mainly due to waning low base effect, official data showed on Tuesday. The GDP growth in April-June quarter this fiscal stood at 20.1 per cent. The Indian economy had contracted by 24.4 per cent in April-June last year.

The gross domestic product (GDP) had contracted by 7.4 per cent in the corresponding July-September quarter of 2020-21, according to data released by the National Statistical Office (NSO).

The government had imposed a nationwide lockdown at the onset of the COVID-19 pandemic last year. China has recorded a growth of 4.9 per cent in the July-September period of 2021.